A new way of analysing fingerprints by mapping sweat pores has been developed by South Korean scientists. The technique uses a water-sensitive polymer to detect the unique pattern of sweat pores on fingertips and may one day help the police to identify fingerprints left on surfaces that are impossible to scrutinise with current techniques.

Fingerprint analysis has been perhaps the most important single technique in the history of forensic science. Traditional fingerprint matching relies mainly on comparing the marks left by sweat as it runs along the fingers’ unique ridges, leaving a unique pattern of amino acids and salts behind. This requires a significant proportion of the fingerprint for reliable comparison, and it is very difficult to obtain prints from a porous surface as the sweat soaks into the material, leaving only dot patterns marking the locations of the sweat pores rather than a complete print.

Scientists from Hanyang and Kyung Hee Universities mapped fingertip sweat pores using a specially-designed polymer that irreversibly changes from blue to red when it absorbs even tiny amounts of water. To produce the monomer, they mixed a commercially available polymerisable carboxylic acid with caesium hydroxide, which attracts water from the surroundings. They spin-coated a very thin layer of this monomer on polyethylene teraphthalate films and polymerised it by exposing it to ultraviolet light.

When a fingertip touches the polymer-coated film, microscopic red dots appear, marking the positions of the active sweat pores. These dots are fluorescent and emit red light when irradiated with blue. The researchers used this to map the sweat pore maps of five volunteers’ fingers. They then lifted 17 fingerprints of these volunteers from ordinary paper, which is porous, by staining the paper with a pigment called ninhydrin that turns purple on contact with the amino acids in sweat. This is a standard forensic method for developing and imaging latent finger marks. 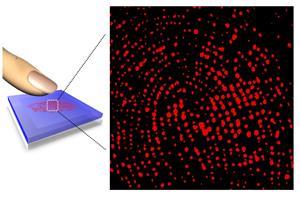 Using computational data analysis, the researchers compared the patterns of the sweat pores in the ninhydrin-lifted latent fingerprints with their reference samples to determine which volunteer the fingerprints had come from. They correctly identified the volunteer in 15 out of 17 cases, attributing the two wrong matches to the poor quality of the latent fingerprints. Moreover, just 20–40 pores are needed to produce a pattern distinctive enough to identify a fingerprint. Team member Jong-Man Kim at Hanyang University says that this means that a partial print just 3mm2 could provide a match.

The team is keen to investigate possible applications beyond forensics. ‘Currently, many offices or government buildings use fingerprints for personal identification,’ explains Kim. ‘They are mainly based on the analysis of ridge patterns, but ridge patterns can be copied. If you use sweat pores it’s impossible to copy.’ However, such a scanner would need a polymer with a reversible colour change, so that it could identify multiple fingerprints as people entered and left the building.

The researchers also hope that the technique will let doctors investigate changes in the way sweat pores work. For examples, not all sweat pores are active, so comparing high resolution scans of fingertips with the red dot patterns left on the polymer, it would be possible to determine which pores are active, and whether age or other factors affect this.

Luke McGarr, a fingerprint expert at Forensic Focus, says that, while the idea of sweat pore mapping is not new, the researchers’ technique may be useful for imaging pores. However, he foresees some problems. ‘They’ve referred to doing some analysis on ninhydrin marks which should, potentially, be quite clear compared with some crime scene marks that you get,’ he explains, ‘and yet with the analysis that they’ve done, they ended up with two incorrect matches from the 15 examples they tested. That, in itself, is worrying.’ He adds that some common techniques used to develop fingerprints, such as powder, can also mask pore structures. Nevertheless, he says that, while a match based purely on pore patterns would be unlikely to stand up in court, such patterns might provide useful supporting evidence.