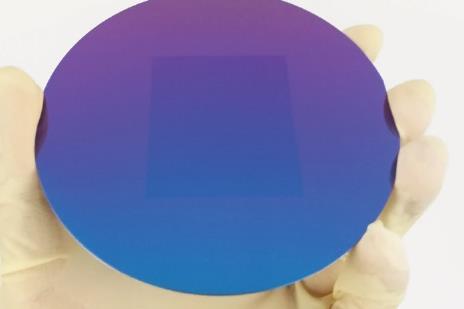 An atomically thin layer of amorphous carbon has been made for the first time, potentially resolving a long-standing debate over exactly how atoms behave in amorphous solids.

Amorphous solids don’t have long-range order like crystals. But what exactly amorphous materials – particularly those of the 2D variety – look like on atomic scale is a topic chemists have argued over for almost a century.

Two competing ideas have been proposed: according to the random network theory, amorphous materials have the same bonding units as crystals, but these units connect randomly. The competing crystallite theory states that amorphous solids contain tiny regions of ordered atoms, but the individual regions are connected by areas of randomly distributed atoms. 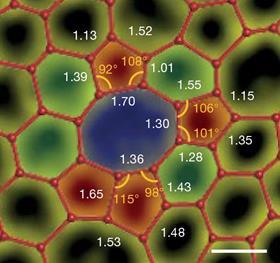 An illustration of the structure of the monolayer amorphous carbon with its random arrangements of pentagons, hexagons, heptagons and octagons of carbon

The first ever electron microscopy images of a 2D carbon sheet have now revealed that crystallite theory is on the money – for amorphous carbon at least. While the study’s authors don’t rule out that amorphous monolayers with random network structures exist, amorphous carbon has a crystallite nature. Its main feature is crystallites of interconnected carbon hexagons. These areas, which vary in shape, size and orientation, are surrounded by random regions containing carbon pentagons, heptagons and octagons.

The material turned out to be surprisingly strong with half the breaking strength of single-crystal graphene. Unlike in graphene, cracks in 2D carbon don’t propagate so a single tear doesn’t result in the entire sheet breaking apart. At the same time, the amorphous material’s electrical resistance is similar to atomically thin boron nitride – 10 orders of magnitude larger than graphene’s.

Its properties could make 2D carbon useful as an anti-corrosion barrier, as a memory storage unit on hard disks and as electrodes in batteries and supercapacitors, the researchers suggest.