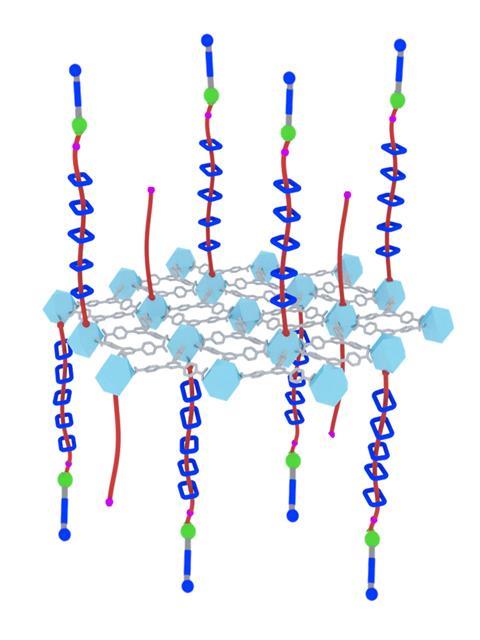 Mechanisorption is the first form of active adsorption

Grafting arrays of molecular pumps onto metal–organic framework (MOF) surfaces has allowed scientists to devise a completely new form of adsorption that they’ve called ‘mechanisorption’. ‘It’s a new phenomenon by which molecules are actively transported to a surface compartment and retained in a non-equilibrium steady state before being released to the bulk in a non-destructive way,’ explains Liang Feng from Northwestern University in the US, who was part of a research team working with Nobel laureate Fraser Stoddart. The process is similar to active transport in biological systems, Feng says.

Adsorption-based phenomena play a key role in areas like catalysis and energy storage. Since the discovery of physisorption and chemisorption in the 1930s, adsorption is generally thought of as a passive process, where the amount and type of adsorbed material are dictated by a continuous equilibrium. The new results might change this, Feng says. ‘We finally cracked the century-long challenge of establishing an active mode of adsorption.’

Charlie McTernan at the Francis Crick Institute and King’s College London in the UK, who was not involved in the study, notes that the key difference between mechanisorption and the previous forms of adsorption lies in the energetics of the processes. ‘While chemisorption and physisorption are energetically favourable and require energy to release the sorbate, mechanisorption requires energy to bind the sorbate and releases some of it when desorbed,’ he says. ‘This work could eventually be used to create molecular scale storage units for specified chemicals, which could be released on demand – along with their trapped energy.’

The researchers used pumping cassettes attached to collecting polymer chains to recruit and adsorb charged rings from solution onto the MOF surface. The system works in a similar way to the polyrotaxane synthesiser developed by the team a year ago. ‘The pumps allow input of external energy to be used to bring rings sequentially from the bulk to the surface, establishing an exceptionally far-from-equilibrium, metastable structure with a large density of rings,’ observes Dean Astumian, a theorist at the University of Maine, US, who also contributed to the work. This creates large potential gradients in the form of chemical capacitors in which energy is stored. Astumian anticipates that functionalising the rings will allow other types of molecules to be recruited and collected at the surface too.

The challenge is essentially one of how do you create nanoconfinement away-from-equilibrium? Chemistry ahoy!

In the studied system, the adsorption process is controlled by multiple redox cycles while desorption is triggered by an acid. ‘By changing the operation cycles, the number of stacked absorbates can be precisely regulated in mechanisorption – something that isn’t possible by traditional methods,’ says Sündüs Erbaş Çakmak at Konya Food and Agriculture University in Turkey. Using polyethylene glycol as the collecting chain, the machine can theoretically do up to 10 redox cycles.

Rafal Klajn at the Weizmann Institute in Israel thinks it would be interesting to consider mechanisorption onto surfaces of electrically conductive MOFs. ‘This might be possible by applying different potentials, as opposed to alternately adding reducing and oxidising agents,’ he says. ‘It will also be exciting to demonstrate that mechanisorbed molecules can perform mechanical work, for example, by forcing the desorption of the thread they’re bound to – this could lead to a new concept in mechanochemistry.’ 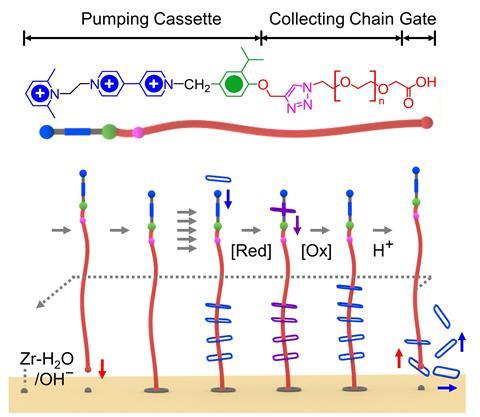 Team member Yunyan Qiu from Northwestern University stresses that this research offers a transformative approach to controlling chemistry at surfaces and interfaces. ‘It opens the door to operating artificial molecular machines on the surfaces of a range of functional materials such as micellar nanoparticles and covalent–organic frameworks. We’re currently investigating both projects in our group,’ he says.

Stoddart adds that there’s good reason to believe that the concept of mechanisorption will feature in textbooks one day. ‘If chemists can work out how it can take on an active suitane-like structure [mechanically interlocked rings], the storage of gases like hydrogen, carbon dioxide and methane will enter a whole new world and become a different ball game altogether,’ he says. ‘The challenge is essentially one of how do you create nanoconfinement away-from-equilibrium? Chemistry ahoy!’