A new member has joined the family of mechanically interlocked molecules. Its discoverers dubbed them clippanes since their chemical structure resembles that of two intertwined Keck clips.

According to the definition proposed by 2016 chemistry Nobel laureate Fraser Stoddart, mechanically interlocked molecules consist of two or more separate components that can only be untangled by breaking covalent bonds. One large class are ‘wheel-and-axle’ rotaxanes, which consist of a dumbbell-shaped molecule is threaded through a large cyclic molecule.

Now, a team in Spain designed a type of entangled metallotweezer – molecules originally created to trap planar aromatic molecules in the cavity between their two arms. Since the tweezers’ traditional U-shape complicates entanglement, the researchers crafted a more rigid alternative to meet the structural and electronic requirements of mechanically interlocked species. 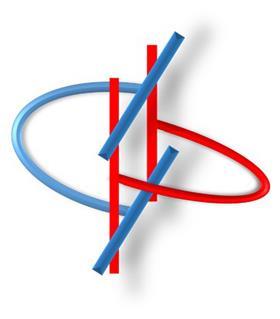 Each tweezer features two identical gold–heterocyclic carbene units linked with a pentacyclic aromatic spacer. The space between the arms – around 7Å – allows two tweezers to spontaneously self-aggregate. But when the carbene includes bulky tert-butyl substituents, the tweezer dimer cannot separate once assembled.