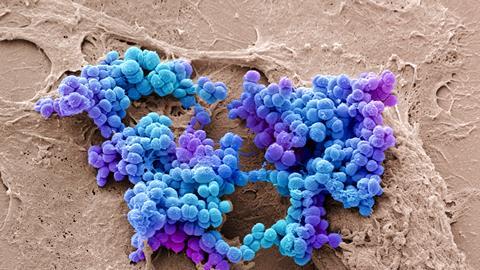 Light-activated molecular machines have been created that act as a broad-spectrum ‘antibiotic’ to mechanically damage bacterial cell membranes. Although this research is currently at an early pre-clinical stage, initial in vivo studies are encouraging.

Modern antibiotics revolutionised medicine following their discovery in the 20th century, but years of misuse now mean that antibiotic resistance is one of the major challenges facing humanity. ‘Although well over 100 antibiotics are available, a person can die today from a bacterial infection that could have been treated by antibiotics in the past,’ explains Ana Santos from IdISBA-Fundación de Investigación Sanitaria de las Islas Baleares in Spain.

Many antibiotics bind to bacterial cell membranes, triggering a sequence of chemical events which ultimately disrupt a fundamental process within the cell. However, as this recognition step depends on only a few receptors, bacteria are able to evolve resistance by modifying or jettisoning certain membrane proteins. 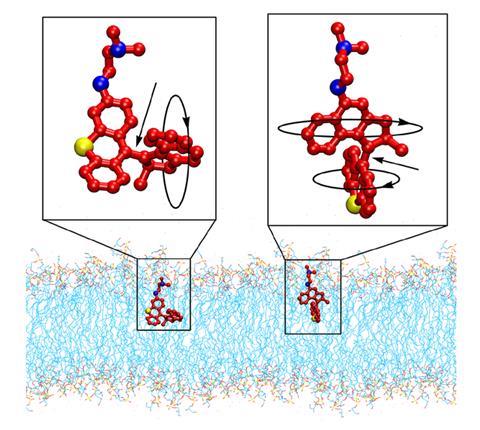 When the molecular motors enter the bacterial membrane they can bore holes that result in the contents leaking out, killing the bacterium

Molecular motors are machines that can rotate around a double bond through interaction with a specific wavelength of light, usually UV. The non-invasive nature of light activation makes molecular motors an appealing treatment tool, especially as an alternative to conventional resistant-prone treatments for cancer and bacterial infections, but the need for damaging UV radiation has limited their clinical applications.

Santos and co-researchers James Tour at Rice University, US and Dongdong Liu, a former postdoc in the Tour group, have now developed a range of blue light-activated molecular machines that demonstrate fast-acting and broad-spectrum antibacterial activity via mechanical disruption of the cell membrane. The positively-charged molecular motors are selectively drawn to the negatively-charged membranes of bacterial cells and, on exposure to light, drill into the membrane, allowing the contents to leak out. ‘It’s very difficult for bacteria to develop resistance to such a mechanism of action since it has so many non-specific targets,’ says Santos.

The team was keen to investigate this therapy in vivo and applied the treatment to infected burn wounds in worms. All untreated worms died within six days of infection, as did those not illuminated with blue light. However, seven days after molecular machine therapy, 60% of the worms that received treatment were still alive. ‘It’s very interesting … but it’s difficult to believe that this could be completely selective for bacteria. I wonder if that’s going to be the challenge for this,’ muses David Spring, a synthetic chemical biologist from the University of Cambridge. ‘But if you’ve got lots of dead cells such as in a burn wound, then it doesn’t matter that the membranes are being disrupted … so maybe this would work as a topical antibacterial.’

Mammalian toxicity studies revealed a small but workable therapeutic window. Improving this window will be one of the key challenges for future work to address, requiring the motors to show greater selectivity for bacterial cells without damaging healthy body tissue. But even at this early stage, the research offers hope. ‘Antimicrobial resistance is a really important issue and novel approaches are always welcome,’ says Spring.

Santos says that the work is a proof-of-concept at this stage but hopes that it goes on to become a ‘new arrow in the quiver to combat antibiotic resistance’.

Correction: The affiliation of Dongdong Liu was updated on 29 June 2022