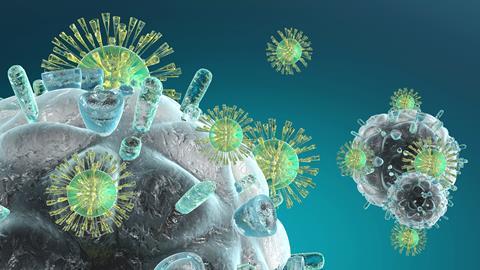 Scientists have created a synthetic immune system out of three types of DNA-decorated gold nanoparticles. With each nanomachine mimicking a different immune cell type, the system can recognise, neutralise and remember an invading pathogen.

There are three key cell types in human and other mammalian adaptive immune systems. Dendritic cells kick off the immune response by capturing antigens – certain parts of a pathogen that identify it as harmful – and presenting them on their own cell surface. This signal tells T cells to destroy the invader, including cells infected by a virus. B cells can also destroy pathogens and are responsible for producing antibodies that help form an immunological memory.

A team led by Bin-Cheng Yin and Bang-Ce Ye from East China University of Science and Technology has now constructed the first artificial system that simulates this biological response. Each cell type is mimicked by DNA nanomachines: gold nanoparticles carrying single-stranded DNA or DNA hairpin loops on their surfaces.

When triggered with a model pathogen – a piece of the HIV DNA – the three nanomachines create a cascade reaction that clears almost 93% of the invader after 22 hours. When reinfected with the same pathogen after that time, the invasion is neutralised at a much higher rate – 97% within only 10 hours.

The pathogen permanently unlocks a hairpin DNA structure in the B cell nanomachine. This means that when the pathogen reinvades, the B cell machine can directly bind it without requiring the three-machine cascade. A reinfection is therefore cleared more quickly. By modifying five nanoparticle-bound DNA strands, the team could also adapt the system to react to other invaders such as DNA pieces related to cancer.

Yin says that the team devoted a lot of effort to making sure the three machines work together. ‘The most difficult part is [to avoid] the nonspecific activation of the machines via a nonspecific reaction between the interrelated components.’

‘One way to understand the work is to look at it as a system for computation,’ says Ido Bachelet, an expert in DNA nanorobotics at Bar Ilan University in Israel. ‘It receives inputs, it processes information, it generates an output – it’s essentially a DNA computer. It’s a beautiful demonstration that molecules can compute, that you can program matter.’

Because DNA computers can directly interface with biological systems, they could be used as programmable medications, says Bachelet. Such systems could then autonomously detect diseases and release drugs when necessary.