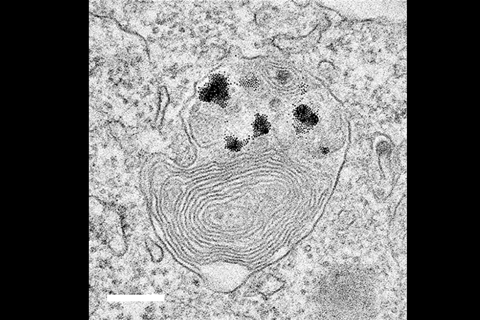 Nanoparticles covered with both positively and negatively charged ligands can target and destroy cancer cells, while getting past the defences of many drug-resistant cancers.

A team led by Bartosz Grzybowski and Kristiana Kandere-Grzybowska at the Institute for Basic Science in Ulsan, South Korea dosed cells with gold nanoparticles attached to thiol ligands, tipped with either quaternary ammonium salts or oxocarbons – each with a net positive or negative charge. The nanoparticles then clustered in cells’ lysosomes – the organelles that carry out recycling, leading Grzybowski to call them the cell’s liver.

Normal cells can get rid of the nanoparticles, but they proved fatal for cancer cells, which have a lower pH than healthy tissues. ‘Because the pH is low, all of a sudden, they crystallise,’ Grzybowski says. ‘They form beautiful crystals of nanoparticles.’

The growing crystals lead to the lysosome swelling up, and the cell dying. ‘In a cancer cell, the lysosome is like a trap,’ Grzybowski says. ‘The crystals are becoming so big that there’s no way to take them out.’

Scientists have known for decades that cancer cells have a lower pH value than normal cells, and the new research details the efficiency of the method for targeting specific cancers – including breast, lung and skin cancers. The approach hinges on the mix of charged ligands. ‘If you only have pluses, they will just repel. If you only have minuses, they will also repel,’ Grzybowski says. ‘But if you have pluses and minuses on the same particle, then you can make them precipitate at a certain pH.’

Some tests show up to 20% toxicity for normal cells, but over 80% for cancerous cells, depending on the concentration of the nanoparticles, the duration of the exposure and the type of cancer cells. Grzybowski says the idea is still a long way from being turned into an anti-cancer treatment, but its mode of action is what excites him.

Most anti-cancer drugs rely on apoptosis, or ‘cellular suicide’ – triggering the death of a cell by releasing ‘executioner’ enzymes called caspases – to destroy their target. But many drug-resistant cancers are immune to caspase-dependent apoptosis, which makes killing cancer cells through their lysosomes especially useful. ‘I’m not claiming this is a miracle cure, but in terms of the mechanism, I’m very excited,’ Grzybowski says.

The team will now work with other types of nanoparticles, such as magnetic nanoparticles that could be brought close to target cells with magnetic fields. But ‘we want to team up with somebody who knows more about this from a clinical perspective’, he says.