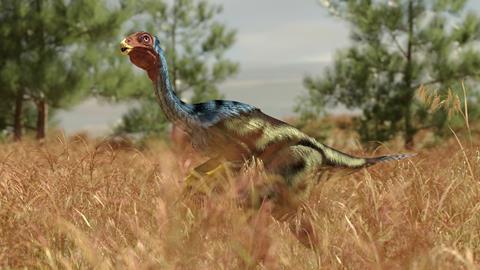 A team of researchers found what seems to be DNA in a 125-million-year-old dinosaur fossil – though how the fragile biomolecules survived fossilisation remains a mystery.

Alida Bailleul, a palaeontologist from the Chinese Academy of Sciences, and her colleagues found the biomolecules in a portion of cartilage from a Caudipteryx specimen. This peacock-sized theropod dinosaur inhabited what is now Northeast China and is one of the oldest species of dinosaurs with feathers discovered so far.

Finding an exquisitely preserved group of cells in a fossil is rare. Nucleic acids are fragile and tend to break down quickly post mortem. Sometimes, minerals protect biomolecules for thousands of years. In other cases, proteins like collagen preserve biomolecules. However, there’s no hard rule as to what makes a molecular fossil possible. In an interview with Forbes, Bailleul’s colleague Zhiheng Li explained that volcanic ashes entombing a carcass could preserve it down to the cellular level during fossilisation.

After decalcifying the fragment, the researchers treated the cells with hematoxylin and eosin, compounds that stain cellular nuclei blue–purple, and cytoplasm and extracellular matrix pink. They also extracted and stained cartilage cells from a chicken to compare the results. While most cells disappeared during the staining process, a few persisted. In one of them, researchers found long, dark purple threads encased in a larger purple circular structure. They believe this to be an intact cellular nucleus with preserved threads of chromatin – a complex of DNA and protein.

These dinosaur nuclei are staining like normal cells, but does it mean there’s DNA inside them? Not really.

This isn’t the first time scientists believe they’ve found biomolecules in dinosaur fossils. In 2020, Bailleul and team found evidence of proteins, chromosomes and DNA material in cartilage from a 70-million-year-old duck-billed dinosaur fossil. However, she and her colleagues remain cautious with any claims about the stained structures’ chemical identity.

‘These dinosaur nuclei are staining like normal cells, but does it mean there’s DNA inside them? Not really,’ says Bailleul. ‘What it means is that there are definitely parts of original organic molecules, perhaps some original DNA in there. Still, we don’t know that yet for sure.’ While staining is a good start, it’s not precise enough to indicate whether certain compounds are present, she explains. 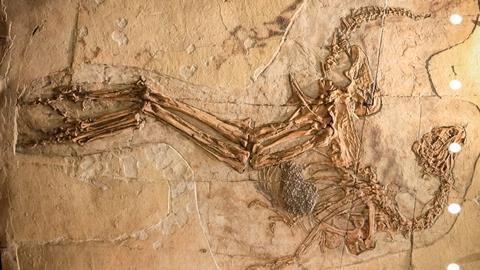 A cast of a Caudipteryx zoui specimen discovered in Liaoning, China

Mary Schweitzer, a palaeontologist at North Carolina State University, US, also advises caution. ‘I commend the authors for their approach, but in my opinion, this study opens the door for further, more specific and higher resolution studies,’ she says. Sergio Bertazzo, a biochemist from University College London, UK, agrees. ‘They need to use other chemical/biochemical techniques, as mass spectrometry or any other method that can confirm the chemical identity of what they are staining.’

Nevertheless, Bailleul is excited to collect more chemical data to get to the bottom of the biomolecular mystery. ‘Let the future, more data, more studies and new technological advances tell the full truth about DNA preservation in deep time.’

But as for the possibilities of a real-life Jurassic Park, Bailleul is explicit: ‘We can never clone dinosaurs and bring them back to life, even if we ended up having their entire genome sequenced.’