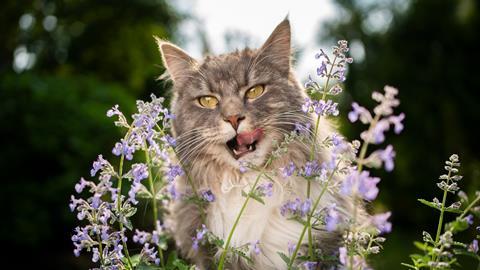 Fox urine compound as good as catnip for some felines

It’s not only catnip, specifically its active ingredient nepetalactone, that can send felines into a state of blissful happiness, but also a structurally unrelated compound found in fox excretions.

Domestic cats, as well as leopards, cougars and lynxes, respond to catnip by rolling around on the floor, licking, dribbling and generally acting like they’re drugged. But despite being dubbed ‘kitty crack’, felines on nepetalactone don’t experience any withdrawal symptoms or other negative side effects. The catnip response is down to genetic factors – only about two-thirds of cats are sensitive to nepetalactone. For those that are impervious to catnip, there are alternatives in the form of silver vine, valerian or Tatarian honeysuckle. 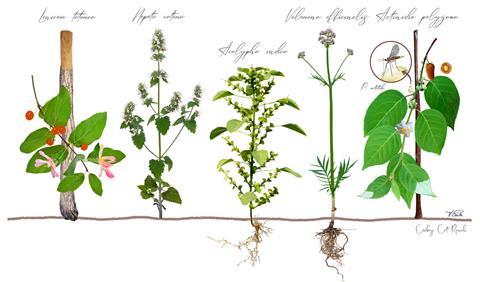 Botanical illustration of the cat-attracting plants used in this study. (From left to right) the barkless wood of Lonicera tatarica, the leaves of Nepeta cataria, the roots of Acalypha indica and Valeriana officinalis, and to the woody stem, leaves, and kiwi fruit galls of Actinidia polygama. The silver vine fruit galls (deformed fruits) are induced by the female gall midge Pseudasphondylia matatabi, who lays her eggs in the A. polygama flower buds

A team of researchers in the US has now tested how cats respond to different plants, as well as to individual compounds. In their exposure studies on six cats, which ran over two years, most cats responded to compounds that are structurally similar to nepetalactone such as iridomyrmecin. But to the scientists’ surprise, the feline test subjects also enjoyed dihydroactinidiolide, a furanone that bears little structural resemblance to nepetalactone. In contrast, the cats didn’t respond to menthol or methyl salicylate, two of the odour compounds in peppermint, nor to civetone, a macrocyclic ketone that attracts some big cats.

Dihydroactinidiolide is one of the compounds in silver vine. It is also found in the urine and scent gland excretions of the red fox – the first time a compound produced by a mammal has been reported to elicit a ‘catnip response’.

It remains unclear why cats react to nepetalactone and other compounds in the way they do. But the observations on dihydroactinidiolide justify revisiting an alternative hypothesis, the researchers suggest: the behaviour may be caused by overexposure to pheromone-like substances.