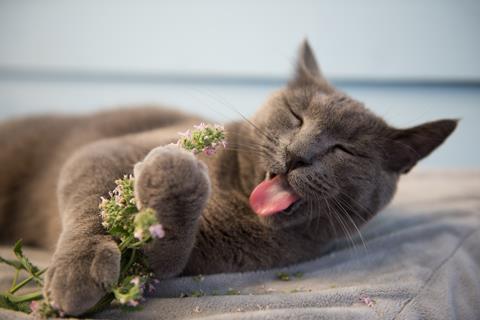 Scientists have discovered a crazy biosynthesis pathway behind nepetalactone, the molecule that sends cats into a state of ecstasy – but also repels cockroaches and other insects.

Catnip plants belong to the same family as mint and other herbs like basil and rosemary. But now they have been revealed to house a unique biosynthesis machinery to make its signature kitty crack molecule nepetalactone. Unlike any other terpenoid synthesis seen before, nepetalactone is made in a two-enzyme cascade. 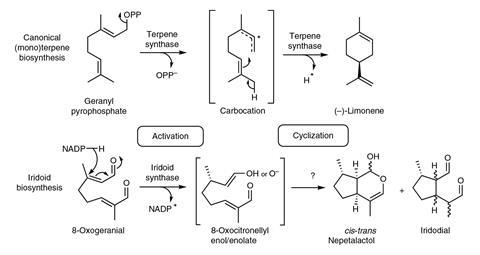 Unlike canonical terpene synthases, which catalyse concerted activation and cyclisation (top), catnip terpenes are formed in a two-step process (bottom)

Other terpenoids, like limonene, are made from a straight precursor by a single cyclising enzyme. But to make the bicyclic nepetalactone, one enzyme first activates the linear 8-oxogeranial and converts it into an enolate. Another enzymes – a dehydrogenase enzyme the plant repurposed for cyclisation – then forms the two rings.

To uncover this intricate cascade, Sarah O’Connor from the Norwich Research Park, UK, and her team isolated the genes active in catnip’s nepetalactone-producing glands. They then transferred the genes into Escherichia coli. Once the bacteria started making the different enzymes, the researchers could test which ones produced nepetalactone.

Why exactly catnip produces nepetalactone isn’t entirely clear yet. The compound wards off certain insects, which could make it useful in agriculture. But understanding catnip’s terpenoid-making process could also help scientists uncover other elusive biosynthetic pathways.