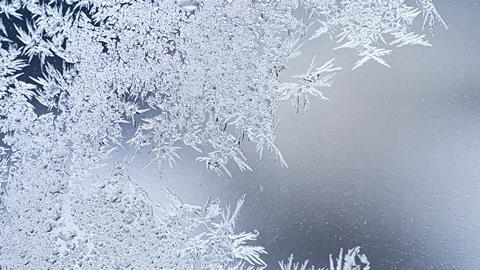 Freeze–thaw cycles could explain how ancient RNA replicated without enzymes

Prebiotic RNA molecules could have copied themselves with the help of cycles of freezing and thawing. The finding offers another clue to solve a longstanding puzzle surrounding the ‘RNA world’ model of life’s origins: how RNA strands could self-replicate without the help of enzymes.

Jack Szostak’s group at Harvard University, US, had previously shown that short RNA sequences can act as templates to make further copies without enzymes. When the phosphates on the nucleotide building blocks of RNA were chemically activated in the lab with the highly reactive heterocyclic compound 2-aminoimidazole (2AI), it caused imidazolium bridges to form reactive dinucleotide intermediates, which enabled RNA copying.

But it remained unclear how this vital chemical activation step could have plausibly occurred in a prebiotic environment. John Sutherland’s lab at the MRC Laboratory of Molecular Biology, Cambridge, UK, found an answer in 2018. His team showed how methyl isocyanide could have formed on early Earth and how, with acetaldehyde, it could produce reactive nitrilium ions. Nitrilium ions were then shown to react with nucleotides and enable 2AI to displace the ions, thereby activating the molecules.1

However, combining Sutherland’s plausible prebiotic RNA activation pathway with Szostak’s template-directed copying pathway hit a snag. An excess of 2AI was required to drive the activation reaction forward. But this excess also inhibited the formation of the required imidazolium-bridged dinucleotides for RNA copying. It seemed the two pathways were incompatible.

Now, Szostak’s lab has found that freeze–thaw cycles can bring the pathways together and enable RNA copying without enzymes in a plausible prebiotic environment.2 ‘We were trying to figure out how both processes could happen at once, and the only way to do that is drastically reduce the concentration of the activating agent,’ explains Stephanie Zhang, who led the work.

This inspired the researchers to investigate freeze–thaw cycles because partially frozen conditions can temporarily bring reactants closer together, thereby naturally concentrating them. This, they found, removed the need for an excess of activating agent while still activating all four ribonucleotides. ‘It really simplifies a complex series of steps, and it is not particularly contrived: we use a one pot reaction, and all we’re doing is freezing and thawing the ingredients a few times,’ says co-author Daniel Duzdevich.

‘The identification of the conditions sequentially, in three steps, allowing nucleotide activation, synthesis of imidazolium-bridged dinucleotides and template-directed RNA-copying is an important achievement,’ says Ernesto Di Mauro, an origins of life researcher at Sapienza University of Rome, Italy. ‘Freeze–thaw cycles favour separation. This is smart, natural, prebiotically plausible and efficient.’

However, whether such a pathway could have led to life emerging from protocells remains uncertain. Freeze–thaw cycles could possibly rupture membrane structures, resulting in the loss of compartmentalisation, explains Zhang. Conversely, freeze–thaw cycles could have assisted fusion or re-encapsulation of mixed RNA from different protocells, akin to horizontal gene transfer.

‘Future work should explore the potential incompatibilities and benefits between freeze–thaw cycles and the makeup of vesicles required by protocell models for the emergence of life,’ Zhang adds.