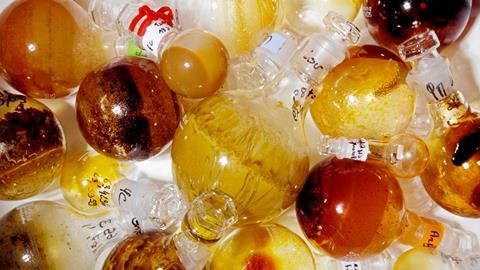 The Miller–Urey ‘primordial soup’ experiment has always been run in borosilicate flasks, which is a bit of luck as the glass promotes the formation of amino acids, peptides and nucleobases, scientists have discovered.

In 1952, PhD student Stanley Miller and doctoral adviser Harold Urey ran what would become a classic experiment for scientists trying to find out how simple compounds turned into the molecules of life. The pair designed a setup thought to simulate conditions on Earth 4 billion years ago, combining water, methane, hydrogen and ammonia. They then created an artificial lightning storm in the flask with an electric arc between two electrodes. 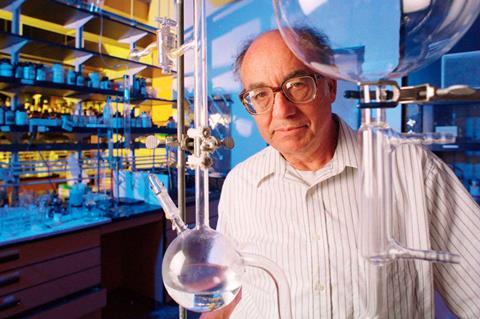 Stanley Miller with the apparatus from the famous 1952 experiment that simulated the conditions thought to have been found on early Earth. Recent research has shown that the glass reaction vessels had their own role to play in the chemical reactions taking place in them

Only when run in glassware did the reaction create a brown broth containing at least 52 organic compounds. In particular, a dipeptide, certain amino acids, dicarboxylic acids, polycyclic aromatic hydrocarbons and a group of biological nucleobases formed more efficiently or exclusively in glass vessels – and to a lesser extent when glass shards were added to a plastic flask. While it remains unclear how exactly glass promotes reactivity, it likely has to do with surface silanol groups and traces of metal released from the glass into solution.

In the decades since 1952, evidence has emerged that the gas mixture used in the reaction might not be representative of early Earth’s early atmosphere after all. Nevertheless, the Spanish–Italian team suggests that by running the reaction in borosilicate flasks, Miller and Urey might have been unwittingly simulated the role of rocks and minerals – a factor now known to be important in origin of life processes.