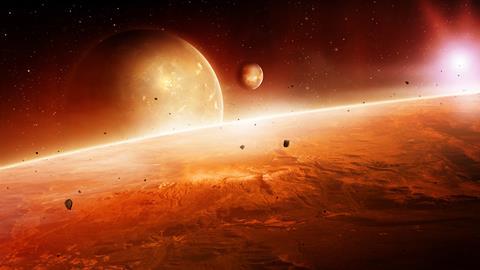 Searching for the chemistry of life on exoplanets

The latest telescopes are now helping to develop a deeper understanding of the chemical processes at the heart of planet formation. This in turn is helping in the search for planets which support a complex range of chemistries and, as a result, might just host life.

Stars form when an interstellar cloud collapses into a protostar, and then protoplanetary discs – made of gas and dust – begin to form around the protostar. These discs are the birthplace of planets. Astronomers at a session of the American Association for the Advancement in Science (AAAS) annual meeting in Austin, Texas called them chemical laboratories, where experiments are taking place on a planetary scale. Powerful radio telescopes are now revealing that a wealth of organic molecules and other volatiles are present in these planetary nurseries. This intense scrutiny is now providing insight into how planets form and which ones might be habitable.

The Atacama Large Millimeter/submillimeter Array (Alma) in Chile – a giant radio telescope created as part of a global partnership – has given astronomers a new way of investigating these protoplanetary discs. ‘Alma has been really wonderful in allowing us to image the distribution of organics in protoplanetary discs,’ said Harvard University astrochemist Karin Öberg. ‘It is amazing that we can actually take images of the organic distribution of discs that are many hundreds of light years away – this is something I think should be mind-blowing,’ she added.

Before Alma was completed in 2014, efforts to image molecules in protoplanetary discs only produced ‘unresolved blobs’, Öberg recalled. However, with Alma they can produce ‘gorgeous pictures’ that show a clear chemical gradation across protoplanetary discs.

Alma is an exceptional tool for studying the formation conditions of exoplanets because it provides an order of magnitude increase in sensitivity, as well as resolution, compared with other radio telescopes. This allows scientists to map out the chemistry that is present during the early stages of planet formation in exquisite detail.

Alma is now helping astronomers in their search for planets that are suitable for life and have similar organic material to that which is thought to have given rise to life on Earth. So far, the instrument has identified formaldehyde and methanol in these protoplanetary discs.

Öberg said the fact that Alma can detect formaldehyde has revealed that the distribution of the chemical is not uniform across the discs examined. This means that these organics are not simply inherited from the earlier stages, as one might assume for the more abundant volatiles. ‘There must be an active organic chemistry going on in these discs to give us this diversity of distributions, and this is the chemistry that we need to understand if we want to be able to predict the organic composition of nascent planets,’ Öberg said.

It is the sublimation and refreezing of these primary molecules that determines the main composition of a nascent planetary system. The tiny dust grains that start out in protoplanetary discs are on the order of 0.1 to 1μm, and molecules either freeze or sublimate off these grains.

The temperature of these grains drops as they get further away from the star, and at some point a temperature threshold is reached where it is cold enough for water to freeze but too cold for water to sublimate. Researchers think that threshold – the water snowline – plays a significant role in planet formation.

Observations of the asteroid belt in our solar system indicate that the water snowline was between Mars and Jupiter. ‘Of course there are some very different modes of planet formation in the four terrestrial planets versus the gas and ice giants,’ Öberg remarked. 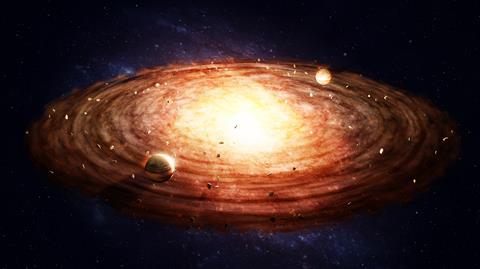 Moving a bit further out beyond the water snowline, there is a point at which carbon dioxide – the second most abundant chemical after water – freezes. A bit farther out still carbon monoxide freezes. This sequence of snowlines means that planets end up with different amounts of water, carbon dioxide and carbon monoxide, Öberg explained.

As you move out through our solar system the gas giants should have an increasingly higher carbon to oxygen ratio, which will change the chemistry of their atmospheres dramatically. Planetesimals like asteroids, comets and rocky planets also undergo a change in the carbon to oxygen ratio as they form further and further away from their star. Therefore, it is important to know where these three snowlines are in order to be able to predict the composition of planets. This is where Alma can help.

It is trickier to work out where the other snowlines fall, but not impossible. Öberg said that the water snowline, for instance, can be discerned by looking at the optical properties of the dust around a protoplanetary disc.

All this new information aside, determining the chemical markers of life on other planets remains challenging. ‘We don’t know what the full range of biosignatures of possible life could be – we can’t know that,’ said Aki Roberge, a research astrophysicist at Nasa’s Goddard Space Flight Center.

Earth has supported life for almost 4 billion years but the plentiful oxygen seen in today’s atmosphere has only existed for around two-thirds of this time. In the Archean period, 4 billion to 2.5 billion years ago, the Earth had a lot more methane and probably an organic haze that more closely resembled Saturn’s moon Titan, Roberge recounted. While in the Proterozoic era – 2.5 billion to 540 million years ago – when photosynthetic life arose, oxygen levels were increasing but not yet high enough to detect over interstellar distances using a telescope.

Roberge emphasised that it is important for Nasa and the astronomy community to keep in mind these three very different periods of Earth’s history when designing new space observatories such as the Large UV Optical Infrared Surveyor (Luvoir). Each of these periods supported life but the Earth would appear very different when viewed from afar at each stage.

Luvoir is Nasa’s exoplanet hunter space telescope concept. It would have the power to probe planets to see if they are similar to Earth. The project is still in the study phase and, if green-lighted, Nasa hopes to launch Luvoir in the late 2030s.

Nasa is also working to develop other tools, such as the Habitable Exoplanet Imaging Mission (HabEx), to directly image planetary systems around sun-like stars. HabEx, also in the very early stages, is another concept telescope that would study planetary atmospheres, and search for and image Earth-sized exoplanets.

Meanwhile, Nasa’s next planet-hunting mission, known as the Transiting Exoplanet Survey Satellite (Tess), could launch as soon as 16 April. Tess, originally scheduled to launch in March but recently postponed, will scan nearly the entire sky and is expected to find thousands of exoplanets.

Nasa is hoping to launch the James Webb Space Telescope in 2019 – although a recent report suggests its launch is likely to be delayed again – to investigate some of the most promising exoplanets discovered by Tess. This should help astronomers to better characterise the atmospheres of these planets and whether they could support life.

However, there is now a question mark over the fate of these ambitious projects in the wake of cuts proposed by the Trump administration. The White House’s 2018 budget request for Nasa, which was released in February proposed eliminating funding for the Wide-Field Infrared Space Telescope (WFIRST), and defunding five of Nasa’s Earth science missions. Trump also proposed a 10% reduction in Nasa’s astrophysics budget, amounting to a cut of almost $1 billion (£700 million) over the next five years.

The US National Academies ranks WFIRST, which is the intended successor to the 28-year-old Hubble Space Telescope, as the highest-priority astronomy mission of the next decade. ‘It is not dead yet,’ Roberge said when asked if she is worried about getting Luvoir and other projects off of the ground, given the administration’s move to axe WFIRST.

‘I certainly hope that we, the scientific community and Nasa, will be able to continue to do great things – truly ambitious things,’ she added. ‘I think the key to making sure that we can do that is to have big goals, and goals that not just scientists can get behind, but the public, society and humanity can get behind.’