Scientists in the US and China have revealed that graphene kills bacteria by slicing through their membranes and yanking out their phospholipids. They say graphene could become a new type of ‘green’ antimicrobial material for everyday use, applied directly to wounds.

Modelling and transmission electron microscopy showed that graphene degraded the inner and outer cell membranes of Escherichia coli bacteria. It cut through the membranes and extracted large amounts of phospholipids from cell membranes because of strong dispersion interactions between graphene and lipid molecules. 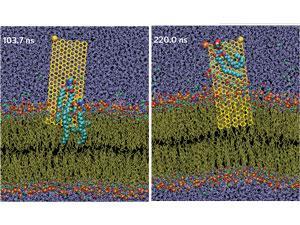 ‘Once extracted, the strong hydrophobic interactions between graphene and phospholipids – as they are pushed together by water – also play a significant role,’ Ruhong Zhou from IBM research explains. The findings might have implications in the design of novel antibiotics and other chemical applications, according to the researchers.

The authors argue that graphene offers the advantage of little bacterial resistance developing due to its physical damage-based bacterial mechanism. The group now plans to study graphene’s killing potential in other bacteria and to study potential side effects to human cell membranes.

It is indisputable that graphene is toxic to E. coli, but there have not been plausible explanations for its mechanism, says materials engineer Miriam Rafailovich of Stony Brook University, New York. She had heard that graphene has unusual conductivity properties or a high degree of crystalline order in two dimensions but none of these reasons satisfied her as to its observed toxicity. ‘This paper gives a very good insight into what may be the problem. The simulations are spectacular and should definitely be verified experimentally,’ she says.

Bart Hoogenboom of the London Centre for Nanotechnology adds that he thinks the work is interesting from a mechanistic point of view, but ‘with the weakness that it heavily relies on computational work on idealised model membranes, at a much shorter time scale – nanoseconds – than the experiments on the bacteria – 2.5 hours of incubation – the membranes of which also contain large amounts of proteins that may affect the way extraneous particles interfere with the membrane.’

‘As far as potential antibiotic design is concerned, it is slightly worrying that the mechanism appears to be rather independent of membrane composition, and can therefore also be toxic for healthy, non-bacterial cells in a host organism such as a human being,’ says Hoogenboom. ‘Such toxicity will be dependent on dose and on particle size,’ so it’s important not to infer that exposure to graphene is toxic per se, he adds.

Graphene is less of a threat to humans or other mammals because nanosheets become surrounded by serum proteins, says Liu Zengrong of the Institute of Systems Biology in Shanghai, though he acknowledges that nanomaterial toxicity is of ‘great concern’ and will require further study.

Rafailovich says that the findings could now be verified independently of the E. coli organism. What would make their case very persuasive is if direct experiments on phospholipid membranes and vesicles were performed in contact with graphene, she explains: ‘Then their simulations and the time dependence could be imaged and verified.’