Hardest diamond ever made from carbon onions 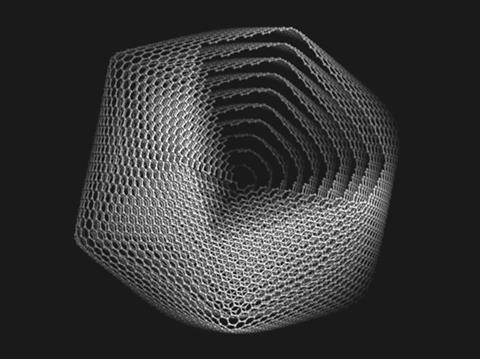 The ultra-hard diamonds were made from carbon onions, like this 10-skin example

A synthetic diamond that is even harder than its natural counterpart and able to withstand even hotter temperatures has been made by researchers in China. The team say the new form of diamond could be used to make superior cutting or crushing tools that can operate under even more extreme conditions.

Yongjun Tian from Yanshan University and his group made the diamond by heating carbon onions – concentric fullerene spheres nested within one another – at 2000°C and 25GPa, hundreds of thousands of times the pressure of Earth’s atmosphere. The resulting diamond has an extremely high hardness of around 200GPa and is stable at temperatures up to nearly 1000°C – 200°C higher than natural diamond.

‘The scientific community has dreamt of synthesising novel materials harder than natural diamond for decades,’ says Tian. The usual approach, he says, is to try and create smaller and smaller grains within the material’s microstructure. The boundaries between grains act like internal supports that strengthen the material, so the smaller the grains, the higher the hardness. Diamonds with grains measuring just a few tens of nanometres can be made by heating graphite at high temperature. But the super strength of Tian’s group’s diamond comes from ultra-fine structures within the grains called nanotwins – tiny crystalline segments that mirror one another across interfaces known as twin boundaries. As well as increasing hardness, the nanotwins also introduce compressive stress that makes the diamond more resistant to oxidation, meaning it can withstand higher temperatures. 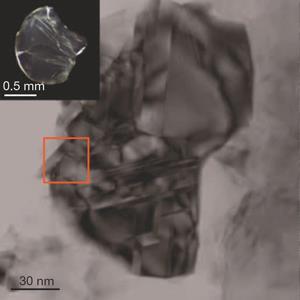 Some groups have tried to make nanotwinned diamonds before, without success. The breakthrough in this case was the use of carbon onions as a starting material. ‘Two conditions are required to form nanotwinned structures during diamond formation – a high nucleation rate and a low growth rate,’ explains Tian. ‘The onion carbon precursors used in our study contain puckered layers and stacking faults, which provide ideal sites for the nucleation of diamond and ensure a high nucleation rate. The spherical arrangement of onion carbon also produces additional inner pressure, which hinders the growth rate.’

Because of its superior hardness and heat stability, the new diamond could be ideal for making industrial tools or scientific instruments – such as diamond anvil cells – that work at even higher temperatures. The group are now working on reducing the pressure needed to make the diamonds by using finer carbon onions, so that they can be more easily manufactured.

‘This does look really promising, if they can develop a technique to produce it in larger quantities,’ says Ho-Kwang Mao of Carnegie institution of Washington, US, who has also worked with super-hard materials. ‘This is something that a lot of people have been trying to achieve for a long time, and this group seem to have covered all the bases.’

Correction: On 12 June 2014 the headline was updated to ‘Hardest diamond ever made from carbon onions’ as ‘toughest’ was used incorrectly