Two carbon nanohoops of different sizes can be made to form Russian doll-style complexes. These structures are the shortest double-walled carbon nanotubes ever made.

Double-walled complexes made entirely out of carbon have fascinated chemists for more than three decades. This has led to some unusual structures: bucky onions, C60 buckminsterfullerenes sitting inside larger spherical fullerenes, or fullerene peapods consisting of buckyballs inside carbon nanotubes.

Shigeru Yamago and co-workers from Kyoto University in Japan have now added another quirky structure to the all-carbon zoo: the shortest double-walled carbon nanotube. Made out of two cycloparaphenylenes, one sitting inside the other, this complex has been predicted theoretically but never synthesised.

Cycloparaphenylenes comprise numerous para-linked benzene rings. As the shortest possible carbon nanotubes, they have been used in the past to direct the growth of larger nanotubes. Yamago’s team found that double-walled nanotubes only assemble when both components are the right size: one of the cycloparaphenylenes needs to contain exactly five more benzene rings than the other. Only then are the two rings are close enough to interact via attractive van der Waals forces. 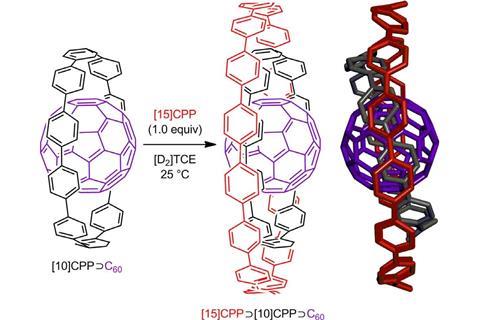 The researchers took the idea of Russian doll complexes one step further and synthesised a ternary complex – a buckyball inside a 10-benzene nanohoop inside a 15-benzene hoop.

Although there are currently no practical applications for these unique structures, studying them gives scientists insight into molecular host–guest interactions. One day, such compounds could be used to make new materials.