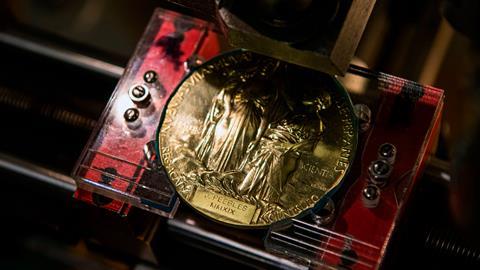 Nanocrystals or DNA synthesis, Crispr or bioinorganic chemistry – it’s that time of the year again when chemists on social media go up against citation data analysis to try and predict who will receive an important call from Sweden in just one week.

Now in its 18th year, Web of Science’s Nobel predictions are based on citation data analysis of the 50 million scientific articles indexed in their database. Their ‘citation laureates’, selected from the few papers referenced more than 1000 times, often go on to win the Nobel prize – usually within a few years of being first selected. 2016 laureate Fraser Stoddart, and two of last year’s winners, John Goodenough and Stanley Whittingham, are among Web of Science’s successful predictions.

The polls are in

Genome-editing tool Crispr-Cas9 won Nature Chemistry editor Stuart Cantrill’s Twitter poll. Who exactly should be credited for the invention, however, is tricky. Jennifer Doudna, Emmanuelle Charpentier and Feng Zhang are commonly cited names. But the question around credit and the ongoing patent battle – as well as the fact that Crispr might equally be nominated for the medicine Nobel prize – make many think it is unlikely to win this year.

That didn’t stop honorary scientific society Sigma Xi voting Doudna their pick for the chemistry Nobel prize. In a competitive vote Doudna saw off Krzysztof Matyjaszewski of atom transfer radical polymerisation fame, Ron Davis, for his work in advancing genomics, gene editing and cloning, and Robert Langer, who developed nanocarriers as a platform for cancer therapy. In another poll, run by Chemistry Views, readers suggested Yaghi – a favourite for the last few years and geneticist Svante Pääbo who has worked extensively on the Neanderthal genome.

For the first time in five years, Saint Louis University chemist Paul Bracher revived his Nobel prediction blog. He gave the best odds (10:1) to the three bioinorganic chemistry pioneers Harry Gray, Stephen Lippard and Richard Holm. Bracher’s personal choice, however, for who most deserves the prize are Marvin Caruthers and Leroy Hood for developing automated DNA synthesis and sequencing techniques. ‘We’re not quite yet in Goodenough territory, but this is a prize that should be awarded and should be awarded soon,’ Bracher wrote.

While Goodenough had been a staple of chemists’ prediction in recent years, there isn’t such a clear-cut favourite this time – although many names may sound familiar. Hood and Caruthers, alongside Michael Hunkapiller, were Web of Science’s citation laureates last year, while Matyjaszewski and Yaghi were previously named in Chemistry View’s polls.

As always, there are plenty of people suggesting that this year’s chemistry Nobel prize will likely go to life scientists rather than chemists. The prize’s shift from core chemistry fields to biochemistry was noted in an analysis in Angewandte Chemie last year. Based on past trends the prize is unlikely to go to a woman, a member of an underrepresented group, or someone outside of Europe or North America. ‘The inequitable distribution of Nobel prizes is a symptom of a bigger problem,’ the secretary-general of the Royal Swedish Academy of Sciences and secretary of the Nobel committee for chemistry wrote in ­Nature last year.

The chemistry Nobel prize announcement, which Chemistry World will be live blogging, will take place on Wednesday 7 October. The physiology or medicine prize will be awarded on the preceding Monday and physics on the Tuesday.

While the announcements will go ahead as normal, owing to the coronavirus pandemic the future laureates will not be invited to Stockholm in December. This is the first time the Nobel Foundation has cancelled the award ceremony and banquet since 1956, when they wanted to avoid inviting the Soviet ambassador because of the USSR’s repression of the Hungarian Revolution. The Nobel lectures and award ceremony will be primarily conducted via teleconference, while the banquet has been moved to 2021.

This article was updated on 6 October 2020