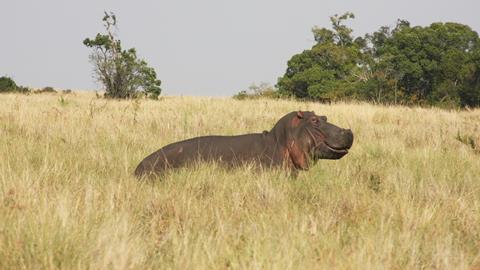 The hippo’s unique lifestyle – which involves feeding on land and defecating in rivers – could play an important role in shuttling silicon nutrients from land to water, ecologists have shown. 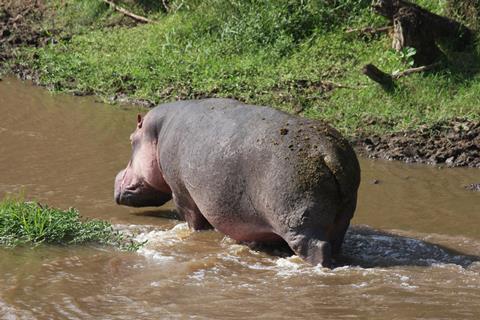 Up to 76% of silicon flux along the Mara river could be due to large numbers of hippos and their dung. Previous studies have shown how the animals’ behaviour can alter entire ecosystems by transferring organic matter into rivers and changing their chemistry.

‘I saw a presentation at a conference about the role of hippos in general in the savannah. And it just popped into my mind that these hippos may be very crucial transporters of silicon from the land to the river,’ says Jonas Schoelynck from the University of Antwerp, whose work until that point had mainly focused on the role of plants in transferring silicon into rivers and lakes.

He adds that silicon is an understudied yet important nutrient in freshwater ecosystems that supports the growth of single-celled organisms called diatoms – a major source of food and oxygen for other species.

Together with colleagues, Schoelynck went to the Maasai Mara reserve in Kenya where there are large hippo populations to take samples from the river. By measuring the silicon content of water, sediment and hippo dung samples in upstream and downstream areas, the researchers showed that the animals essentially act as silicon ‘pumps’ – transferring large amounts of silicon that would otherwise be locked up in soil into the water via their dung.

‘We were able to calculate how much silicon comes into the water through hippos, and compare this value with the difference between upstream and downstream,’ says Schoelynck. The team also used isotope analysis and microscopy – examining particles of silica called phytoliths that are formed in grasses and other plants – to show that the sources of silicon in hippo dung were identical to those found in the water. They calculated that hippos are responsible for around three quarters of the total silicon flux along the Mara.

The extent to which hippos increase the silicon above the background level in the river is ‘surprisingly high’, says Schoelynck. ‘Although I did kind of expect them to have a big impact,’ he adds. ‘One time we spotted around 80 hippos over a stretch of just 250 metres. The river really is full of hippo dung – you can see it floating, you can see it on the banks, you can see it basically everywhere.’

‘We’ve known for some time that hippos were engineering ecosystems physically, but this work provides some strong evidence that hippos also serve as biogeochemical engineers as well,’ says Rebecca Lewison, an ecologist at San Diego State University in the US, who is part of the International Union for Conservation of Nature’s (IUCN) hippo conservation group. ‘Given the ongoing concerns regarding declining hippo populations, this research identifies some clear links to explain how loss of hippo populations within an area can have widespread effects that could directly impact river and lake ecosystems and the humans that rely on river and lake resources.’

Hippos are classed as vulnerable on the IUCN Red List of threatened species, and have disappeared from many rivers. Schoelynck says this could have shifted the nutrient balance of the water in these areas, making it less able to support oxygen-generating plankton like diatoms.

‘You’ve got to have silica and fertilisers like nitrogen and phosphorus in the right ratio,’ he explains. If the silicon decreases too much in relation to nitrogen and phosphorus – which often enter the river as sewage or agricultural runoff – microbes such as algae and cyanobacteria take over. This depletes oxygen in the water and has harmful knock-on effects for other aquatic species. ‘Nitrogen and phosphorus are entering aquatic systems worldwide, because of human activities,’ says Schoelynck. ‘If, at the same time, silicon goes down – maybe because the hippo population declines in some areas – that amplifies the problem.’