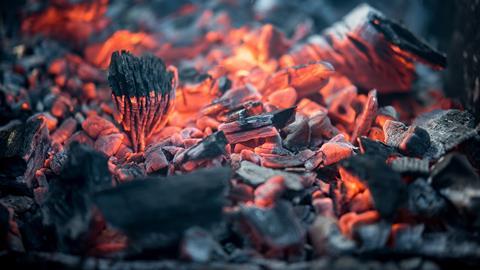 How to win a barbecue cook-off

The science behind the taste of summer

Barbecue breeds competition. There are barbecue teams who travel all across the US to compete against one another every weekend. Each team spends countless hours perfecting their recipes, tending to their fires and driving from their homes to the next cook-off. And there’s some interesting chemistry you need to understand if you want to compete with the best.

What is a barbecue?

Good question: the definition of barbecue is cause for argument. Families tending to burgers and hotdogs over a bunch of hot coals in their back garden might call it a barbecue, but in reality it’s just grilling. The word and cooking style are derived from the Arawakan term barbacoa, which refers to wooden supports used for drying fish and meat. The Caribbean peoples used these supports to hold their food away from immediate contact with a fire as it cooked – and this indirect heat is the crucial component to barbecuing. There are, of course, some regional differences too. In the US, Carolinians barbecue pork and Texans barbecue beef – and good luck to the person who tries to convince either that the other is legitimate. 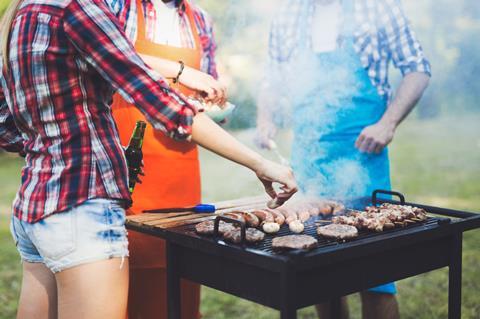 Where does chemistry come in?

No matter whether you are grilling or barbecuing, there is some chemistry that binds the two and other chemistry that helps to distinguish one from the other. No matter your cooking method, there are several chemical processes that are shared when cooking with fire: the enhancement of flavour via the Maillard reaction and the development of the proper texture.

For both meats and vegetables, controlling the changes in texture to occur on the same time scale as the development of flavour is an art. By understanding the differences in the types of food we are cooking, we can best match – and take advantage of – their chemistries for either grilling or barbecuing.

The Maillard reaction (named after French chemist Louis Camille Maillard) is a maddeningly complex collection of cascade reactions that gets kicked off when proteins react with sugars. Maillard products are legion, and lead to new flavours, colour (browning) and the development of a crust. Heteroatomic cyclic compounds like pyrazines, furans, thiophenes, and furanones take most of the credit for the savory flavours associated with this reaction. However, there are plenty of less complicated organic molecules, diones and acids among them, that play a significant role in how we experience the Maillard flavour.

Any food containing proteins and reducing sugars (any saccharide that contains a ketone or aldehyde in its linear form) is susceptible to the Maillard reaction, which means it touches just about every kind of food that we cook: meat, bread, vegetables and even coffee. Unlike caramelisation, the Maillard reaction can occur at temperatures below 100°C. Flavour and browning is more pronounced in the absence of water. 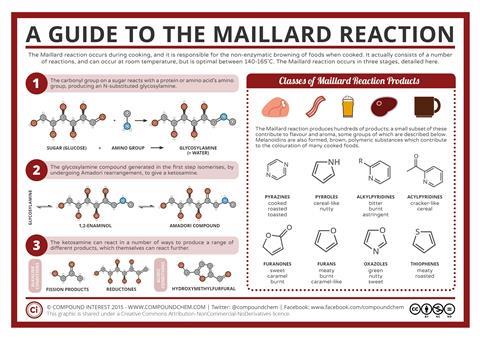 Are there dangers associated with grilling food?

Yes, although it’s believed that they are slight. Acrylamide generation occurs during the Malliard reaction, and is especially pronounced when cooking potatoes. This has been associated with an increased lifetime risk of cancer, although it’s not possible to tell how great the increased risk happens to be. Another potentially harmful family of side products is the polyaromatic hydrocarbons. These compounds are created by both the Maillard reaction and the oxidation of charcoal. While the risk from eating individual dishes cooked this way is very low, many health organisations have noted significant health effects from eating 10 meals a week prepared this way. 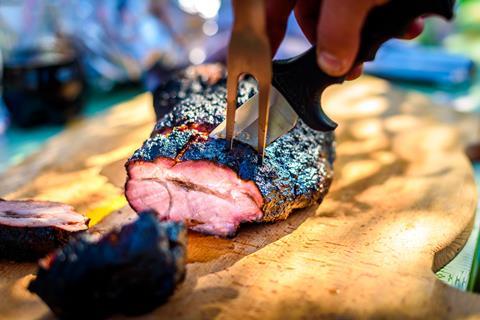 So, should I grill or barbecue my meat?

For meat, the unfolding of the proteins actin and myosin dictate when it’s ready. Cooking over a hot flame, it is possible to unfold myosin in a steak or a chicken breast or hydrate vegetable starches at the same rate as achieving optimal Maillard flavor development. These meats are ideally suited to being grilled.

Cuts of meat that contain large amounts of collagen (roasts, pork shoulder, ribs, brisket) should not be cooked quickly and are best barbecued: while collagen’s unfolding thermodynamics demand less energy than actin’s, its slow kinetics require a different approach. The ‘low and slow’ heat of a barbecue puts the timing of the collagen unfolding and the Maillard reaction on par with one another.

How should I cook vegetables?

Not all vegetables are the same, and how long cooking takes is tied to the hydration of starches. However, drying the surface of the food is helps make the Maillard process efficient. Salting some vegetables early, like courgette and aubergine, is also a handy tip to draw out some of their water and keep them from getting mushy during cooking.

Does the choice of fuel affect flavour?

Absolutely: the flavours that we experience from grilled and barbecued food are also informed by the type of fuel we use. Woods with high lignin contents tend to have the most intense aromas – which is why mesquite has a more noticeable odour than cherry.

When we grill and barbecue, it is important that the wood or charcoal decomposes through pyrolysis, or smoldering, rather than burning. For both materials, pyrolysis is more efficient at transforming lignin into smoky and spicy phenolic compounds like guaiacol. And don’t be afraid of spitting: some of the smoky and Maillard flavours are augmented when drippings hit the hot coals and generate aromas that infuse back to the food.

The most pressing concern with a barbecue is ensuring that you don’t lose too much moisture to evaporation while cooking. Of course, this is an issue for smoking vegetables and tofu as well. Brining before cooking, mopping during cooking and crutching (covering with tin foil) part way through cooking are all ways to maintain hydration through a cooking process that takes hours to finish.