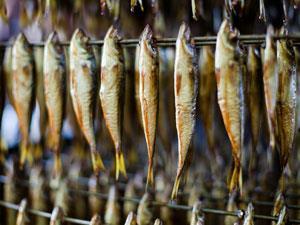 That’s not a shopping list for a very unhealthy weekend, but a selection of the familiar products that all contain guaiacol. 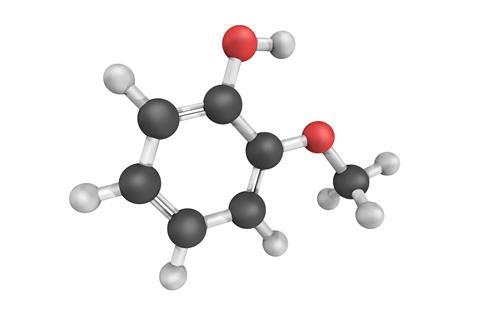 Guaiacol is produced when the lignin found in wood is burned, and it’s partly responsible for the flavour of smoke-preserved food such as bacon and fish, as well as peated whisky and roast coffee. Despite contributing the smoky taste, it’s not actually responsible for the distinctive smoked smell – that’s down to the presence of another compound called syringol.

Many foods are smoked to help preserve them and add flavour, though in climates that aren’t hot and dry, the smoky flavour was probably an unavoidable consequence of drying food over a fire. The distinctive smoky, peaty flavour of some whiskies, notably those distilled on the Scottish island of Islay, comes from the peat-fuelled fires used to dry out the barley malt prior to fermentation and distillation. Lapsang souchong tea, regarded by some as the original black tea, is smoked over pinewood fires, so pine tar flavours contribute alongside the smokiness of the guaiacol. 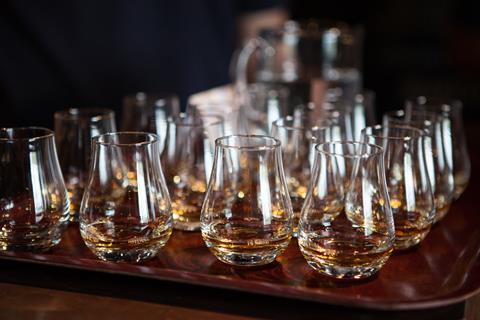 Although guaiacol is the main chemical responsible for smoky tastes, wood smoke contains a wide range of compounds which can be condensed out to form ‘liquid smoke’. This can be used as a preservative and to add flavour in its own right, even without a nearby fire. The first commercially available ‘liquid smoke’ was marketed by Ernest Wright in the US in 1895.

The story goes that the teenaged Wright noticed black liquid dripping from the stove pipe at the print shop in which he worked. When he later became a pharmacist, he conducted experiments on the chemistry of wood smoke, and discovered that he could condense out a liquid with the flavour of smoke. In a move that would raise the blood pressure of today’s scientific ethics panels, he tested his condensate on his friends by preparing a ham in liquid smoke and serving it up at dinner. His unwitting guinea pigs then asked for more, and Wright realised he was on to a winner.

Worried that the secret of his method would get out, he refused to patent it. But as part of his expanding business he hired a German chemist to help perfect the technique and purify the product. This was a fortunate move as the US government tried to sue Wright for selling a food product containing methanol. Without the expertise of his hired chemist, there would indeed have been methanol in Wright’s sauce, and he would have lost the suit, incurring substantial damages.

But guaiacol does more than just contribute smoky flavour. Also known as 2-methoxyphenol, it is a simple compound: just phenol with a methoxyl group next to the hydroxyl group. In the lab it’s produced by methylation of catchecol or hydrolysing 2-aminoanisole. Guaiacol was originally discovered by the Italian chemist Ascanio Sobrero, who is much better known for discovering nitroglycerine and working alongside the legendary Justus von Liebig.

Many plants and insects synthesise guaiacol, and it’s often derived from plants of the genus Guaiacum, which are remarkable in several other ways including having some of the hardest heartwoods known.

Guaiacol is also responsible for one of nature’s most destructive forces: a swarm of locusts. A species of bacteria found in the gut of the desert locust, produces guaiacol as they break down plant matter. The locusts then use guaiacol as a component in a pheromone that makes the insects aggregate together. This can lead to destructive swarms of locusts on a quite literally biblical scale. The role of guaiacol was discovered back in 2000, and understanding the microbiology and chemistry of swarming will be essential in developing ways to prevent the massive crop destruction that locusts can cause.

So the next time you enjoy a tasty breakfast of a smoked bacon sarnie washed down with a mug of rich, well-roasted coffee, or slowly savour a dram of your favourite peated Scotch whisky, remember, it’s guaiacol that makes it taste so good.

Chemistry World’s Ben Valsler there, with the smoky chemistry of guaiacol. Next week, defeating the enemy.

Ground elder is my nemesis. No matter how much time I spend weeding this thug of a plant, it always comes back. So I’m driven to reach for the Roundup. I’m in good company for Roundup is the world’s bestselling weedkiller.

Discover the compound enabling this victory over persistent weeds by joining Jen Newton in next week’s Chemistry in its Element. Until then, thank you for listening, I’m Meera Senthilingam.