Swiss researchers have turned sunlight and air into fuel in a rooftop refinery – the first of its kind. They estimate that covering an area slightly bigger than Switzerland in larger versions of their solar plant could satisfy the global demand for aviation fuel.

‘Our objective is to produce carbon neutral fuels for transportation, particularly the aviation sector, because that is perhaps the most difficult to decarbonise,’ says team leader Aldo Steinfeld of ETH Zurich.

Their setup extracts water and carbon dioxide from air, which are reduced to carbon monoxide and hydrogen using solar power and then processed into fuel. First, water and carbon dioxide are captured using an amine-functionalised sorbent from Climeworks, a spin-out company from Steinfeld’s lab. The gases then are fed into one of two solar redox reactors.

A parabolic dish and reflector concentrate sunlight by a factor of 3000, directing it into one of these reactors. This thermally reduces the redox material, cerium oxide, and outputs oxygen. The reduced ceria is then reoxidised when carbon dioxide and water enter the chamber, generating carbon monoxide and hydrogen, respectively.

Meanwhile, it is the turn of the other reactor to receive concentrated sunlight. Since only the reduction step is endothermic and needs solar radiation – requiring around 1500°C and 10mbar – two reactors can run in parallel. ‘While one reactor performs the reduction with solar energy, the second reactor is performing the oxidation with water and CO2,’ explains Steinfeld. ‘We apply both temperature and pressure swings to maximise the oxygen exchange capacity of [cerium oxide], and thereby the fuel yield per cycle.’

Finally, the syngas mixture of hydrogen and carbon monoxide is processed to methanol using a commercial catalyst (Cu–ZnO–Al2O3) at 230°C and 50bar. Typically, on a clear Swiss sunny day, the mini-refinery makes 100l of syngas, which can be processed to around 50ml of pure methanol. But the syngas can also be converted into liquid hydrocarbon fuels such as kerosene. 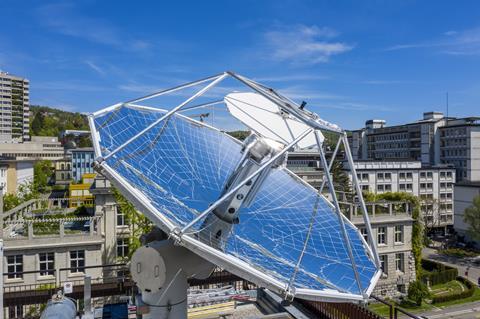 Located on the roof of an ETH Zurich building, the refinery’s parabolic reflector bundles solar energy and directs it into one of the two chemical reactors in its centre

‘Direct air capture [of carbon dioxide] is in the early commercial phase, and still undergoing a lot of rapid technology transitions,’ comments John Cirucci chemical engineer at Arizona State University, US, who has worked on such systems. Climeworks, one of several companies in this area, switched on its first plant in 2017 with a larger scale plant in Iceland that went online this September.

‘The most innovative technological part of what’s described in this [study] is the solar thermal chemical process,’ Cirucci says. This step also has the most potential for improvements, he adds. For example, ceria is valued for its stability, but a comparable redox material might operate at a lower temperature.

Steinfeld’s team chose to create a jet fuel refinery because air travel releases more carbon dioxide per kilometre than any other mode of transport. ‘While other sectors are making deep reductions, [or] are stabilising or plateauing their emissions, aviation emissions are growing at an exponential rate, as more people are flying more often,’ says Nikita Pavlenko, senior researcher with the fuels team at the International Council on Clean Transportation.

‘A lot of aviation emissions are driven by a small, wealthier group of people who fly quite frequently,’ Pavlenko adds. ‘Aviation is one of the sectors that is best equipped to pay for its own technology changes and emission reductions.’

By the time solar jet fuels reach 10 to 15% of fuel volume, we ought to see the costs for solar kerosene nearing those of fossil kerosene

Steinfeld’s team proposes a quota system to force airlines and airports to buy renewable fuels. ‘This would start out small, such as 0.1%,’ notes Steinfeld, which would have a minimum impact on flying costs. But the quota would rise each year, stimulating investment. ‘By the time solar jet fuels reach 10 to 15% of the fuel volume, we ought to see the costs for solar kerosene nearing those of fossil kerosene,’ he says.

The Swiss scientists envision a commercial scale plant with 10 solar towers, powered by fields of reflectors, to produce 95,000l of kerosene a day. This is enough to fuel an Airbus A350 carrying 325 passengers from London to New York and back.

To cover the global demand for kerosene – around 414 billion litres per year – there would need to be enough solar plants to cover 45,000km2, they calculate. This is equal to around 0.5% of the area of the Sahara Desert where such plants could run under optimal sunlight conditions.

Thank you to Ellen Stechel from the Global Institute of Sustainability and Innovation at Arizona State University, US, for help with fact checking this story.