Porphyrin assembly is ‘largest pure organic synthetic cage’ ever made 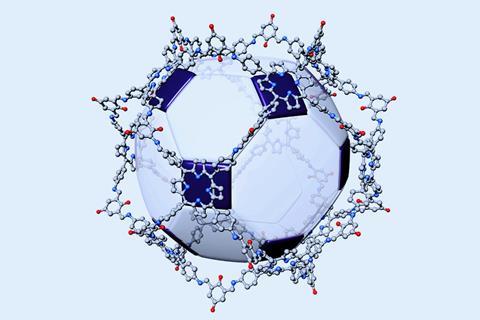 Researchers in South Korea have created what they claim is the ‘largest void containing pure organic cage’ molecule ever reported. The ‘gigantic’ spherical structures are made from porphyrins and linker molecules and self-assemble in a simple template-free process.

In nature, large hollow molecules serve important biological functions – for example transporting iron and proteins, or protecting genetic material. But designing artificial cage structures and making them in the lab can be difficult. Subunits can self-assemble into smaller structures, meaning that laborious template-assisted synthesis strategies are often required to avoid this. While several large hollow organic molecules have been made previously, designing cages with diameters greater than 3nm has proved challenging.

The design and synthesis of the gigantic porphyrinic cages

The porphyrin units and linker molecules were specially designed so that when the 36 subunits are brought together, they self-assemble into a gigantic cage structure through the formation of 48 new covalent bonds.

The researchers showed that the porphyrinic cages work as heterogeneous catalysts for photooxidation reactions, and that they can also be used to encapsulate linear guest molecules – suggesting that they could find uses in light-harvesting chemistry, or as cargo-trafficking systems. They now hope to use the same principles to design even bigger structures that could be used to protect and transport large biomolecules.