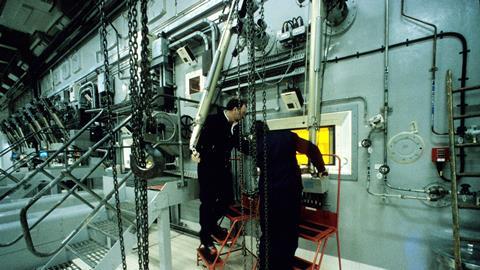 One of the world’s oldest nuclear reprocessing plants – and the last remaining one in the UK – will cease operations in July this year.

Since its opening in 1964, the Magnox reprocessing facility at Sellafield in northern England has received almost 55,000 tonnes of spent nuclear fuel from Magnox power stations across the country, as well as from reactors in Italy and Japan. Magnox are carbon dioxide-cooled reactors that run on unenriched uranium with graphite as the moderator. They take their name from the magnesium–aluminium alloy cladding around the uranium fuel rods.

The plant used tributyl phosphate to extract uranium and other actinide compounds from the spent fuel via liquid–liquid extraction. The recycled uranium can then be reused as fuel or stored safely as the reprocessing greatly reduces the overall volume of radioactive waste.

‘Sellafield can now move from the reprocessing phase of its life into a future focused on decommissioning and clean-up,’ said David Peattie, chief executive of the Nuclear Decommissioning Authority. The clean-up is expected to take about two years, and Sellafield will remain a storage site for spent fuel from the UK’s 15 advanced gas-cooled reactors.

There will be no job cuts at Sellafield, the press release stated, as employees whose roles are no longer required will be redeployed to other roles within the company.