As the first man-made element, technetium was a pioneer of nuclear alchemy. Since its 1937 discovery in a fragment of foil from a cyclotron, atom smashers have swelled the periodic table with more than two dozen synthetic elements. Yet technetium did not simply rest on its laurels – it became a workhorse of medicine.

Technetium-99m is the world’s most widely used medical radioisotope, involved in more than 30 million procedures every year. It decays to release a gamma photon that can be used to monitor beating hearts in real time or pinpoint tumors. With a short half-life of six hours, Tc-99m cannot be stored on hospital shelves. Instead, it is extracted from a generator that contains a longer-lived parent isotope, molybdenum-99. 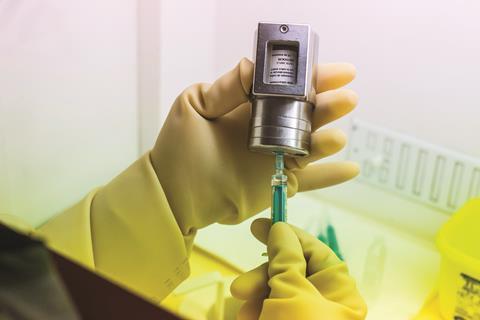 The convoluted and fragile supply chain for Mo-99 begins in just a handful of aging nuclear reactors around the world, some over 50 years old. From 2008 to 2010, a series of outages at key reactors led to a global shortage of technetium. Some patients missed out on vital procedures; others underwent alternative scans that exposed them to more radiation or produced poorer diagnostic results. Since then, two of the main reactors have shut down for good, and about half of the world’s Mo-99 supply now comes from Belgium and the Netherlands. Last year, a report from the US National Academies of Sciences, Engineering, and Medicine concluded that there is a substantial chance of further shortages in the coming years.

Various research teams have been hurrying to develop more reliable options. One of the most promising, developed at the TRIUMF research centre in Vancouver, Canada, cuts Mo-99 out of the supply chain altogether. It relies on medical cyclotrons, already found in many hospitals, to make Tc-99m directly by firing high-energy protons at a Mo-100 target.

Now the technique has taken an important step forwards. In May, Alliance Medical announced that it will use the technology to supply UK hospitals with Tc-99m, and expects patients to get the first doses in 2019. This not only adds confidence that the cyclotron production method is viable – it could put technetium, once again, at the forefront of a medical revolution.

I saw the technology in action when I visited Vancouver last year, when spin-out company ARTMS was in the final stages of testing the Tc-99m production process. A compact cyclotron, just two metres wide, bombards its target for about six hours before the Tc-99m is extracted in lead-lined fume hoods, with each run producing enough material for hundreds of diagnostic tests.

Alliance plans to install a new TR24 cyclotron to make Tc-99m at its facility in Dinnington, and will begin production there next year. If the UK’s Medicines and Healthcare products Regulatory Agency gives it the green light for clinical use, a second cyclotron will follow. The pair should make enough Tc-99m to cover the vast majority of the UK’s needs, amounting to more than 600,000 imaging procedures per year.

It’s worth noting that the Organisation for Economic Co-operation and Development takes a more optimistic view of Mo-99 supply than the National Academies’ report, predicting that supplies should keep up with demand even if an existing reactor fails. Nevertheless, the UK is an ideal place for cyclotron production, not least because it is a small nation — Tc-99m can be rapidly shipped around the country in less than a couple of half-lives, ensuring that not too much of the precious material is lost in transit. Indeed, the British Nuclear Medicine Society recommended in 2014 that the cyclotron route should be pursued in the UK.

The deal comes just as Brexit raises fresh concerns about the UK’s supply of isotopes. There is continuing uncertainty about whether the country will remain part of Euratom, which helps to oversee the medical isotope supply chains. It is easy to frame Alliance’s cyclotron plans as a ‘good news’ Brexit story, with cutting-edge technology arriving just in time to give the UK isotope independence once it leaves Europe’s nuclear club.

Despite the fears, though, I’m not convinced that leaving Euratom would irrevocably sever our Mo-99 supply chain. The isotope’s distribution network includes reactors, processors, and generator manufacturers that are spread around the globe. Many countries that are not Euratom members trace their supplies back to the EU.

That’s not to say it doesn’t matter if we leave Euratom – it does, very much. The UK would have to set up new agreements with isotope suppliers, and new regulatory systems to monitor the materials’ movement and use. It would have to develop even more stringent systems to import nuclear fuel – which currently produces about one-fifth of the country’s electricity – as well as some reactor components. A new oversight regime would be needed for the world’s biggest civilian stockpile of plutonium, at Sellafield. And leaving Euratom could seriously hamper the UK’s participation in international nuclear research, including the world’s largest fusion experiment, ITER, in France.

Cyclotron-generated Tc-99m shouldn’t be cited as a reason why leaving Euratom won’t hurt the UK. It should instead be seen as a vital way to wean ourselves off an aging and inefficient supply network.