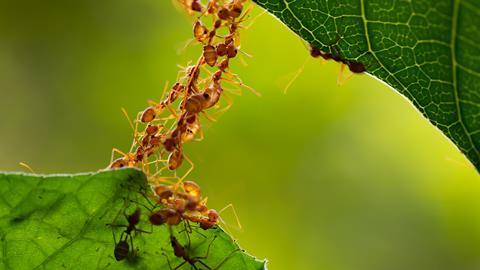 Guided by a magnetic field, a swarm of nanoparticles self-organises into a conductive bridge to repair broken circuits. The particles’ movements imitate that of army ants that can build bridges using just their bodies to cross gaps beyond an individual’s reach.

Social insects’ collective abilities have inspired scientists to create artificial swarms that could one day deliver drugs, manipulate tiny particles or even form artificial muscles. But imbuing each individual swarm member with the ability to sense and move in their environment puts restrictions on size.

Li Zhang from the Chinese University of Hong Kong and his team have now created complex movement in a swarm of simple nanoparticles. Their gold-coated magnetite – iron oxide, Fe3O4 – particles, each less than half a micrometre in size, are both magnetic and electrically conducting. Placed in an oscillating magnetic field, the nanoswarm creates a ribbon-like structure. The researchers can then navigate the swarm into a gap in a broken microcircuit and prompt it to elongate into a wire to bridge the gap. Although the swarm needs to be manipulated while in solution, once it is in place, the solvent can be removed and the connection becomes permanent.

Zhang’s team is now working on giving their nanoswarms abilities beyond electrical conductivity by customising the magnetite particles with different functionalities.