A UK high court judge has awarded ?20 million in payouts to 1650 people who sustained chemical burns from sofas manufactured in China.

The payout was announced after thousands of people suffered severe skin or eye complaints, breathing difficulties or other medical complications after being exposed to dimethyl fumarate through leather sofas manufactured by Chinese companies Linkwise and Eurosofa and bought from a number of UK retailers.

The beneficiaries of yesterday’s ruling are part of what is believed to be the largest consumer group litigation in UK legal history, but legal proceedings are still ongoing in 3000 cases where liability has yet to be determined.

In May 2009, an EU-wide ban came into force barring consumer products containing dimethyl fumarate, a chemical sometimes used as a biocide to kill moulds that could cause furniture or shoe leather to deteriorate while being stored or transported in humid climates. The chemical is generally placed inside the furniture in sachets and then evaporates, impregnating the leather to protect it from mould. 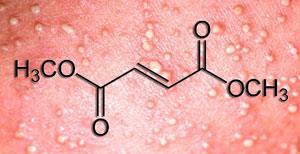 Prior to the 2009 ruling, dimethyl fumarate could not legally be used in the manufacture of goods within the EU because biocidal products containing the compound were not authorised under the EU Biocides Directive. However, manufacturers outside the EU were free to use these biocides and export their products to the EU. The 2009 ban prevented products containing dimethyl fumarate from making it to the EU market.

The compound itself has been found to be an allergic sensitiser at very low levels, with concentrations as low as 1ppm triggering allergic reactions.

A small Finnish study carried out in 2008 in response to an ’epidemic’ of dermatitis linked to sofas and chairs made in China pinpointed dimethyl fumarate as the likely culprit.1 Tapio Rantanen at Central Hospital in Lahti used gas chromatography-mass spectrometry to analyse furniture samples, and then identified compounds using a mass spectral library. Patch tests on 19 people revealed that of all the compounds tested, dimethyl fumarate was the most likely cause of the outbreak of skin disease.

Somewhat suprisingly, dimethyl fumarate is one of the active ingredients in a drug called Fumaderm, which is marketed by Biogen Idec to treat the skin condition psoriasis. The drug was approved in the mid-1990s in Germany, and is used by specialist dermatology centres in the UK. The company is also developing dimethyl fumarate as a multiple sclerosis treatment (currently in Phase III trials) and for rheumatoid arthritis (Phase II).