A mechanically interlocked molecule protects force-activated functional groups – called mechanophores – from stress and strain, chemists in the UK have discovered. The mechanical protecting group could be used in self-healing or damage-detecting materials.

Unlike mechanoresponsive polymers, where non-covalent interactions spread out over the entire structure are responsible for their behaviour, mechanophores are small molecular units whose covalent bonds break under stress. Some Diels–Alder adducts, for example, undergo retro-Diels–Alder reactions when activated by high-intensity ultrasound.

Each mechanophore is triggered by a certain amount of force intrinsic to its molecular architecture. ‘Imagine that you have a specific functionality that you like, that is activated at a certain force, but you don’t want it to be triggered at such low force,’ says mechanochemistry expert Charles Diesendruck from the Technion Israel Institute of Technology, who wasn’t involved in the research. ‘This [mechanical protecting group] is a solution to that issue because you can change the mechanical activation without changing the chemistry.’ 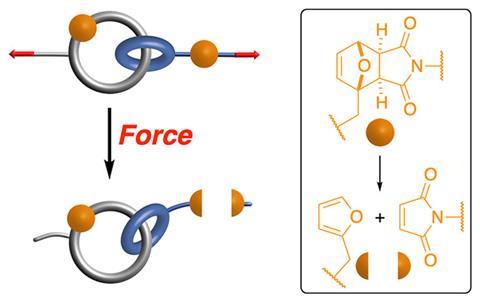 The mechanical protecting group is a catenane – a molecule made up of two mechanically interlocked rings. Guillaume De Bo and Min Zhang from the University of Manchester discovered that a mechanophore built into a catenane ring remains undamaged under conditions that would otherwise break it apart.

‘Because the two rings of the catenane can slide along each other freely, under tension, they will automatically reach a point when the tension is perfectly equalised over the two rings,’ explains De Bo. This equalisation spreads force over the entire catenane structure, diverting stress away from the mechanophore.

‘I think this study elegantly highlights a new method to regulate the mechanical activation of chemical species,’ says Niamh Fox, an expert in mechanochemical processes from the University of Cambridge, UK. ‘It firmly cements mechanical bonds as an addition to the toolkit of mechanical activation.’ Diesendruck agrees: ‘This was one of the most creative works in the field that I’ve seen in recent years.’

Mechanophores could make for self-healing polymers or materials with a built-in damage-reporting system. ‘The advantage of mechanophores is that they can be used in any polymer, including things like polyethylene, polystyrene or polypropylene, while other mechanoresponsive materials have to be synthesised from scratch,’ says Diesendruck. Fox explains that the catenane could allow protection of a mechanophore during processing ensuring it is only activated when needed.

De Bo thinks that mechanical protecting groups could also be used in force-activated molecular machines based on interlocked molecules. ‘Combining mechanical bonds and mechanical force can actually lead to really unexpected chemical transformations,’ he says. ‘Compared to what’s known about thermal reactivity, we have barely scratched the surface.’