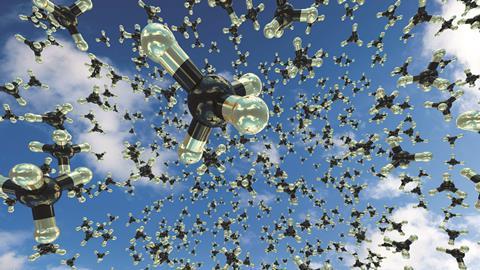 A new reactor can directly convert natural gas into valuable liquid feedstock petrochemicals, such as benzene, in a single step. The work could pave the way for cheap, clean and simple conversion of methane into aromatic precursors for a wide range of products including plastics and fuels that are normally derived from oil.

Natural gas is mostly methane and is usually converted into precursor chemicals by converting it into syngas – a mixture of hydrogen and carbon monoxide. However, the end products tend to be transport fuels not aromatics and it’s expensive which restricts production to large gas fields, meaning many smaller fields remain untapped.

Non-oxidative methane dehydromatisation (MDA) using a zeolite catalyst is touted as a promising route for direct and cheaper methane conversion. However, the process has struggled because of thermodynamic limitations and a build-up of coke deposits which poison the catalyst. 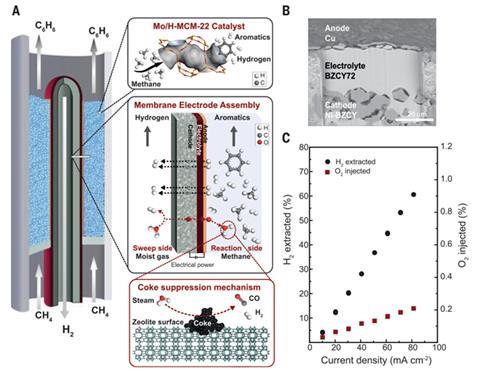 Methane can be converted directly into aromatics such as benzene in this new reactor. The barium-zirconate membrane created by the researchers protects the zeolite catalyst from poisoning

Now, a Norwegian and Spanish team has designed an MDA process that uses a ceramic co-ionic barium zirconate membrane in the catalytic reactor to simultaneously remove hydrogen and injects oxygen. It works because hydrogen is a reaction product and so reducing its concentration shifts the thermodynamic equilibrium, which enables the system to produce more reaction products, namely benzene. However, hydrogen removal promotes coke formation and catalyst degradation. This was overcome by the injected oxygen which reacts with coke to minimise catalyst degradation.

‘The fact of achieving higher yields but also much higher stability was fully unexpected,’ says co-author Jose Serra at the Institute of Chemical Technology in Valencia, Spain. He says the exploitation of the co-ionic character of the membrane was the key. ‘Ceramic proton conductors, such us barium zirconate, are very stable at high temperature in contrast to metallic membranes and do not promote coking reactions when exposed to hydrocarbons at high temperature,’ he explains.

Serra envisages exploitation of smaller sources of methane such as biogas from organic waste and residual methane at production or processing sites, which is currently flared off. ‘Another option is in situ, on demand production of aromatics to meet the demand of chemical industries, plastics producers, additive manufactures, and so on,’ he adds. ‘Chemical companies could produce benzene by themselves just by using methane “from the tap”.’

CoorsTek, the Norwegian company behind the ceramic membrane technology and project collaborator, has already scaled up production of the membranes and is now building a pilot plant.

But the commercial feasibility of this process is yet to be determined, remarks James Spivey, who investigates natural gas catalysis and conversion at Louisiana State University, US. ‘There is much to be done in terms of the stability of the BZCY72 membrane and how best to reduce the small, but not negligible, carbon monoxide yield,’ he explains. ‘Despite these limits, this is a significant and clear advance over current technology.’