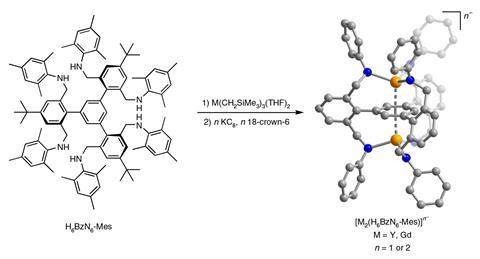 A benzene diradical dianion stabilised by two gadolinium ions on either side is the first simple molecule that is Baird aromatic in the ground state. Baird aromaticity typically exists only in high-energy, excited state systems.

For almost all molecules, their singlet state is their ground state – molecular oxygen being a notable exception. Triplets are usually reserved for excited state, which can be reached, for example, through light activation.

But a team of chemists from the US and the Netherlands has now created a benzene that is a Baird aromatic triplet in its ground state. The benzene diradical dianion sits between two gadolinium 3+ ions, surrounded by several large substituents. Gadolinium is paramagnetic and can engage in magnetic exchange coupling, which stabilises the benzene diradical’s triplet state to the point where it becomes the molecule’s ground state. Calculations showed that triplet benzene’s ring current is around 30% larger than that of regular singlet benzene.

While there have been some examples of ground-state Baird aromaticity in macrocyclic and bicyclic systems, the triplet benzene is the first simple monocyclic molecule to have this property.