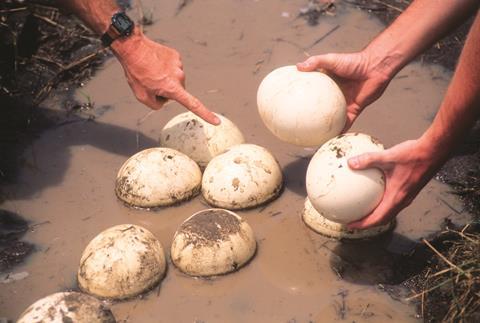 Proteins bound to minerals can be preserved for millions of years making these molecules up to 50 times older than any sequence ever found before. That’s the discovery made by researchers who have isolated prehistoric proteins from ostrich eggshells found at archaeological sites in Africa.

An international team led by researchers at the Universities of York and Sheffield isolated the proteins struthiocalcin-1 and struliocalcin-2 from fossil eggshells found in sites in Tanzania and South Africa, some of which were 3.8 million years old.

In the past, fragments of DNA frozen for up to 700,000 years have been found in permafrost environments. But the proteins the team found have persisted in hot, dry conditions and pre-date even the earliest samples of prehistoric DNA.

The researchers say the proteins survived for so long because of the way they are bound to the other minerals within the shell, and have built computational models to explore this. The discovery suggests that analysing proteins from the fossil record might be able to give us more detailed insights into evolutionary history.