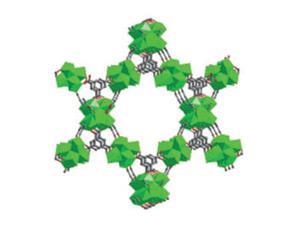 Metal–organic frameworks (MOFs) may become an essential tool to destroy chemical weapons as researchers in the US have found one that has the potential to rapidly break down nerve agents.

Initially synthesised in the 1930s, nerve agents, such as sarin and tabun, were used extensively in the Iran–Iraq war in the 1980s. The consequences of using these lethal organophosphates were made clear in August 2013, when a chemical attack in the suburbs of Damascus in Syria killed an estimated 1500 civilians. The Syrian government has since destroyed its stockpiles, but safely and rapidly destroying such stores is still a major headache for authorities.

Now, Omar Farha and his colleagues at Northwestern University may have found a solution to this problem. Using a zirconium-based MOF as a catalyst the team were able to accelerate the hydrolysis of dimethyl 4-nitrophenyl phosphate (DMNP), a common nerve agent simulant. The catalyst is able to convert all of the DMNP into a safe dimethoxy phosphate anion within 30s and maintains its performance when the simulant is pumped through a filter containing the MOF.

The team argues that such a rapidly-acting catalyst could be incorporated into protective equipment and provide a quick means of destroying chemical stockpiles.