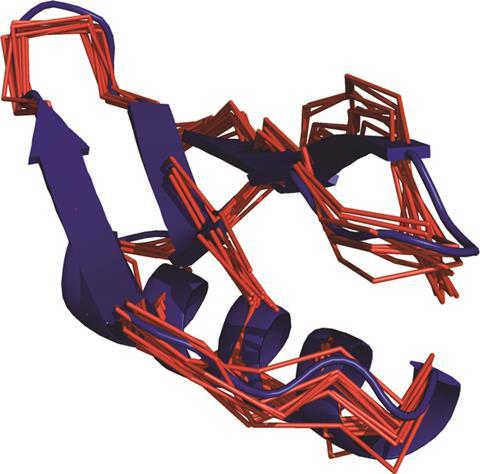 It is vital to know the structure of a protein to understand its chemical and biological functions. Scientists usually need to purify and crystallise a protein to determine its 3D structure by x-ray crystallography. Not only is this process difficult and lengthy, it can also misrepresent the protein’s structure, as the measuring conditions are vastly different from the conditions inside a living cell.

Now, a researcher team led by Xun-Cheng Su from Nankai University in Tianjin, China, Conggang Li at Chinese Academy of Sciences, and Thomas Huber from the Australian National University, has analysed a protein’s structure using nuclear magnetic resonance (NMR) spectroscopy inside living frog cells.1 The researchers tagged the protein with a beacon, a paramagnetic lanthanide tag, which binds to a cysteine residue on the outside of the protein. ‘The measured effects from the beacons tagged onto the protein give away the positions of the atoms in the protein, in a similar way that a set of satellites can be used to locate the exact position of a GPS receiver,’ Su explains.

At the same time as Su’s team, Daniel Häussinger from the University of Basel, Switzerland, Francois-Xavier Theillet from the Institute of Integrative Biology of the Cell, France, and colleagues developed a similar technique using a lanthanide tag to pin down 3D protein structures by NMR.2

Brian Smith from the Institute of Molecular, Cell and Systems Biology at the University of Glasgow, UK, says that although both studies are interesting, their scope is limited. To make sure that the paramagnetic tag doesn’t change the protein’s shape, its structure needs to be determined separately by other means. ‘Neither study addresses the issue of assigning NMR resonances in-cell if the structure, and thus the spectrum, is significantly different from the in vitro structure,’ he explains.

Su’s team is now working on enhancing the tag’s performance and applying the technique to uncover structures of protein–protein complexes. ‘In-cell NMR provides a window to atomic-scale information and protein structures in their native, cellular environment,’ says Theillet. ‘We all want to make such studies easier and faster, and that’s what we improve with these new strategies,’ he concludes.