Those plagued by mosquitoes may one day be able to ditch the DEET in favour of substances naturally produced by skin, according to researchers in the US. Ulrich Bernier, and colleagues, at the US Department of Agriculture’s Agricultural Research Service, have identified compounds that scramble the senses of mosquitoes so they can’t detect people nearby. They say safer, more effective repellents based on these substances could help reduce the spread of mosquito-borne diseases like malaria. 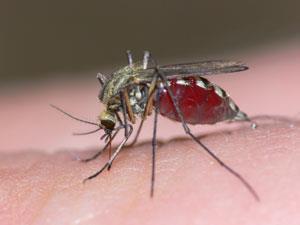 Mosquitoes are very good at sniffing out skin to bite, and are attracted to several of the chemicals on our skin, including components of sweat and substances produced by bacteria that live there.  But some people seem less attractive to mosquitoes than others, and it is these differences that interest Bernier. For decades he and his colleagues have been trying to pinpoint what it is that puts the mosquitoes off biting some people.

‘We’ve looked at different human subjects that varied in attractiveness to mosquitoes, and looked at the chemicals coming off the skin,’ Bernier told the 246thACS National Meeting & Exposition in Indianapolis, US. ‘From that research we were able to identify about 270 chemicals which we all produce.’

The group then tested the effects of each compound individually, spraying them onto surfaces exposed to cages of mosquitoes. Some substances, like lactic acid in sweat, are obvious attractants, but the tests highlighted a suite of other compounds that appear to confuse the mosquitoes so they don’t take flight. These substances can mask the effects of attractants and block the mosquitoes’ ability to smell food – when a hand is put in a cage of mosquitoes where one been released, they don’t recognise it is there.

‘The [repellent] compounds we have all have similar structures – they are all piperazines and piperadines with 5–7 membered rings containing one or two nitrogen heteroatoms, simple substitutions like methyl and ethyl groups and no double bonds,’ says Bernier. ‘We still don’t know exactly how they have this effect on mosquitoes.’

Bernier’s group have patented over 20 of these compounds which they say could form the basis for a new type of repellent, different to traditional ‘contact’ repellents like DEET. Because they work by disrupting the mosquitoes’ ability to detect people – rather than just smelling bad - these repellents would not have be used on skin, but could instead be released at a distance to keep mosquitoes away from populated areas. Bernier says they could also be combined with substances that stop mosquitoes smelling CO2 in breath.

The motivation for replacing DEET extends beyond the need to provide consumers with a less unpleasant-smelling alternative, explains Michael Roe, an insect toxicologist at North Carolina State University, US, who also spoke at the meeting.

‘DEET is the gold standard for repellent, which has been around for 50 years and assumed to be safe,’ he says, ‘but we showed that when exposed to human liver cells, DEET affects gene expression on every chromosome and has epigenetic effects.’

Concerns have also been raised about the ability of mosquitoes and other pests to develop DEET resistance. A recent study showed it was worryingly easy to breed DEET-tolerant populations of Aedes aegypti, the yellow-fever carrying species of mosquito.

Bernier says the next step is to develop sprays that incorporate the compounds his lab have identified, but adds that these products are still a long way off. In the meantime, those who wish to beat the bugs must do so the old fashioned way. ‘Avoid dusk and dawn, wear long sleeves and use a contact repellent on exposed skin,’ says Bernier.