The first aldol reaction that uses esters instead of aldehydes as one coupling partner has been developed by scientists in the UK. It will give chemists ‘an entirely new retrosynthetic disconnection,’ says the study’s leader Stephen Thomas from the University of Edinburgh.

The aldol reaction is a carbon–carbon bond-forming process between two carbonyl compounds – traditionally a ketone and an aldehyde. ‘It’s a textbook reaction,’ says Thomas . ‘Nature uses aldol reactions for the synthesis of products vital for life: fatty acids, polyketides and others.’ 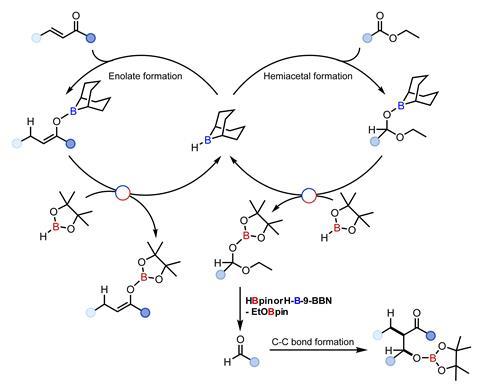 But aldehydes are prone to polymerisation and oxidation. Thomas’ team now found a way to use more stable – and commercially available – esters and lactones instead. ‘The use of lactones also provides a route to products that wouldn’t be accessible by traditional aldol methodologies without using protecting group chemistry,’ says Thomas. The reaction involves simply mixing and stirring all reagents, including the borane catalyst, in a single flask at 40°C.

‘This new strategy makes use of highly stable enones and esters as substrates, in contrast to conventional approaches using saturated ketones and aldehydes,’ comments James Taylor who works on organic synthesis and catalysis at the University of Bath, UK. ‘The chemical motifs that can be prepared with this method are found within many biologically active compounds and this approach opens up a completely new chemical disconnection for their preparation.’

In a typical aldol reaction, a nucleophilic enolate combines with an electrophilic aldehyde. ‘Our new catalytic approach generates both the enolate and the aldehyde in situ from an enone and an ester,’ explains Thomas. He points out that both processes are driven by a single, multifunctional boron catalyst. ‘We managed to do this by carefully controlling catalytic turnover in both reactions using transborylation – a controlled exchange reaction between two boron centres.’

‘The generality of this process is impressive and there’s no need for prior substrate modification or the typical strong bases like LDA [lithium diisopropyl amide],’ comments organic chemist Luke Henderson at Deakin University in Australia. Svetlana Tsogoeva, who does research in organocatalysis at the University of Erlangen–Nuremberg in Germany, adds that the reaction avoids self-condensation side products and is highly chemoselective. ‘[It] shows very good potential for future applications in academic and industrial research,’ she says.

But the reaction requires a large excess of the ester, notes Taylor. ‘Overall, this is an exciting development that will no doubt inspire further advances; for example, the development of an enantioselective variant, in which the absolute stereochemistry of the products is controlled alongside the relative stereochemistry, is a significant but worthwhile future challenge.’

Thomas hopes that his colleagues will want to try the reaction. ‘ Ultimately, it would be great for others to take this somewhere we never envisaged.’