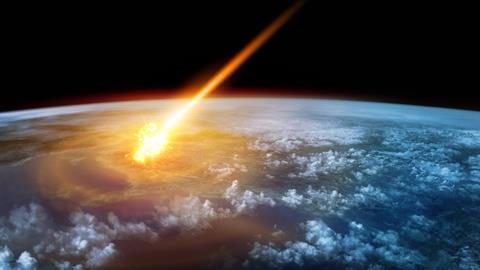 The phosphates that were at the root of life on primordial Earth were most likely produced chemically by energy from the sun. That’s the claim made by UK and US researchers who say that their work demonstrates a plausible pathway by which ultraviolet light could chemically produce phosphates from material in meteorites that bombarded the young planet.1

Phosphates are essential to all life on Earth: they are components of DNA and RNA, as well as the structural materials for bones and teeth. It is clear, therefore, that prebiotic chemistry must have had a source of phosphates. This source, however, remains controversial, with some researchers arguing they came from igneous rocks and others that phosphates could have been delivered from space.

Much work has been gone into schemes explaining how prebiotic molecules could have developed through purely chemical means into lifeforms capable of evolving through natural selection. The other key chemicals required, such as hydrogen sulfide, hydrogen cyanide and water, are all thought to have been present on the early Earth, but phosphorus has remained a puzzle. During Earth’s chemical differentiation, the phosphorus near the surface ended up in the mineral apatite. ‘In previous experiments, apatite was ground into a powder to increase surface area,’ says geochemist Stephen Mojzsis at the University of Colorado, Boulder. ‘The solubility of apatite is very, very low. Productive chemistry from a reliable natural source is required, and it doesn’t look like the crust is particularly reliable in that respect.’

In 2019, physical chemist Ralf Kaiser of University of Hawai’i proposed that meteorite bombardment could be a source, as soluble phosphorus-containing organic compounds can be synthesised in interstellar ices.2 Mojzsis, however, cautions that ‘most of the mass of late accretion to the planets came in from big impactors, rather than in some kind of gentle delivery from small objects like today. Such asteroids and comets – 10km to 100km in diameter – create impact plumes around 2000K, so any interesting organic molecules are burned to a crisp!’

The new work – a collaboration between Mojzsis and prebiotic chemists Dougal Ritson and John Sutherland at the MRC Laboratory of Molecular Biology in Cambridge – also invokes meteorites. Instead of suggesting that they delivered organic molecules ready-made, however, the researchers looked at cratering data and geochemical evidence to estimate the amount of phosphorus they delivered during Earth’s early bombardment.

This phosphorus would have been delivered as phosphide. The researchers developed a mechanism showing how, in the presence of hydrogen sulfide and water – both of which were present on the early Earth – ultraviolet light can oxidise this phosphide to phosphate. Experiments under ultraviolet light demonstrated this. Better still, the geochemical scenario implied by this mechanism dovetails with the MRC group’s previous work.3 ‘You can oxidise the phosphorus species while also doing photoreductive chemistry of the hydrogen cyanide also produced by meteorite impacts,’ explains Ritson. ‘This can lead to amino acids and nucleotide and phospholipid precursors, so you can localise everything very neatly indeed.’ 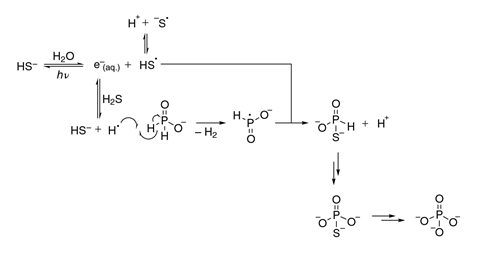 Proposed mechanism for the formation of phosphite (PSO33−),a useful reagent for prebiotic chemistry, and thence phosphate (PO43−) from the irradiation of H2PO2− and HS−

‘From the mechanistic viewpoint, it’s a really important paper showing how phosphates can be formed,’ says Kaiser. He is less persuaded, however, by the researchers’ estimation that it provided most or all of the phosphate needed for the genesis of life. He disputes Mojzsis’ assertion that interesting organic molecules would not have survived a meteorite impact, however, saying that ‘in meteorites huge arrays of organic molecules have been detected’. He concludes that, ‘it’s almost impossible to quantify how much phosphate comes from Earth, how much comes from space and how much comes from meteorites before being oxidised on Earth because there are so many uncertainties and no solid error analysis is being done’.