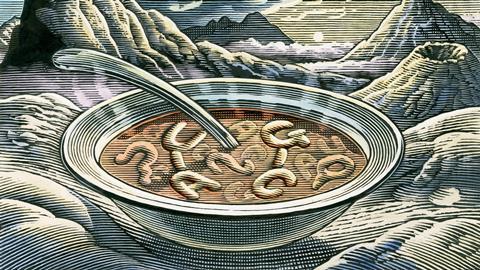 Researchers have shown how the four chemical ‘letters’ of the genetic alphabet may have arisen together under the same conditions on early Earth – up until now it was a mystery how all four could have been made at the same time. The work offers a glimpse into how information encoding RNA building blocks crucial for life could have first evolved in shallow ponds driven by repeated cycles of drying-out and refilling.

The four letters, or nucleobases, of life’s information carriers RNA and DNA come in two types of nitrogen-based molecule – purines and pyrimidines. The purines (A and G) partner up with the pyrimidines (C and T, or U in RNA) to form two complementary base pairs, which enables information to be stored, copied and read. To create the first strands of RNA on ancient Earth both purines and pyrimidines would have had to be present. The problem is that researchers have only ever been able to produce the two kinds of bases separately under different and partially incompatible conditions.

Now, Thomas Carell’s lab at the Ludwig Maximilian University of Munich, Germany, has discovered how all four bases can form together in an environment that contains the same starting materials. ‘It seems that the RNA nucleosides are very special because they form from simple starting materials in cascade reactions which are tuned by small fluctuations of outside parameters,’ says Carell.

To recreate prebiotically plausible conditions found on early Earth, the team referred to recent geochemical models that suggest that the planet’s atmosphere was not totally reducing as previously thought. Rather, it was likely more redox with carbon dioxide and sulfur dioxide as potential atmospheric components, which could allow for nitrogen to exist in a semi-reduced form of hydroxylamine (NH2OH) – a potential source of nitrogen for the formation of all four nucleobases.

A unified synthesis for pyrimidine and purine RNA bulding blocks

Experiments revealed that hydroxylamine and other starting materials including cyanoacetylene, malonodinitrile, nitrous oxide, water and urea, as well calcium carbonate, zinc and iron ions, and formic acid, was all that was required to produce both purines and pyrimidines.

Experimental conditions simulated an environment that assumed these chemicals would have been present in shallow ponds that experienced pH and temperature fluctuations owing to seasonal changes and volcanic activity. The result of such fluctuations would be wet and dry cycles, which the team showed could drive the synthesis of nucleosides with the addition of ribose. In the presence of phosphate minerals, the team further showed that phosphate groups formed – a prerequisite for the sugar–phosphate backbone that links nucleotide building blocks together to form nucleic acids.

‘This takes another big step towards getting continuity into schemes that make RNA building blocks from small molecules,’ says origin of life expert Steven Benner at the Foundation for Applied Molecular Evolution in Florida, US. He suggests too much prebiotic chemistry in the past has been stepwise and discontinuous. ‘Because they are discontinuous, these processes are not persuasive to anyone outside of the field. This new work offers a process that has the chance of being persuasive.’

But others remain unconvinced. ‘However much interesting chemistry is presented, this is far from an integrated and prebiotically plausible synthesis of the four ribonucleotides,’ comments Jack Szostak who investigates the origins of life at the University of Harvard, US. ‘For example starting with pure concentrated ribose is not prebiotically plausible.’

Carell doesn’t disagree. ‘We still do not understand the reactions that lead to the formation of ribose and we need to understand the origin of chirality,’ he explains. ‘Finally we have to learn how the nucleosides can be converted into long strands and last but not least we need to find good models and theories about the RNA-peptide world that then led to the formation of modern RNA and proteins.’