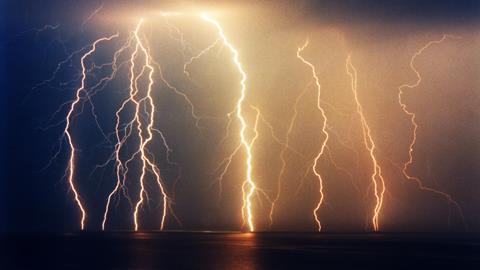 Lightning may have created essential building blocks for life on Earth 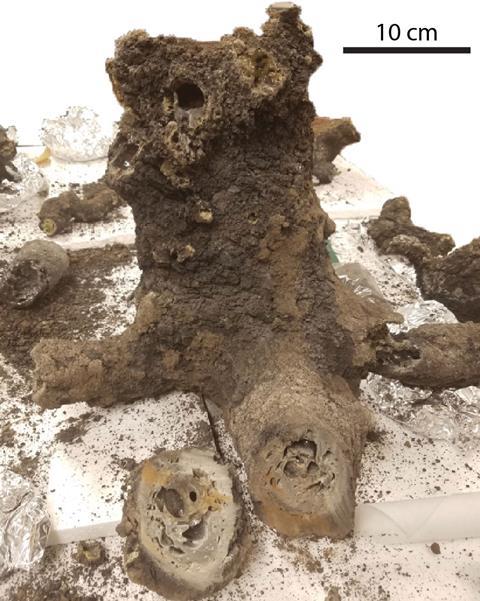 Fulgarites are created by lightning striking clay-rich soils. They have been discovered to contain biologically active forms of phosphorus

‘One of the problems for the origins of life is where we get the source of phosphorus from, because phosphorus on early Earth is trapped in basically insoluble and unreactive minerals – they’re common, but they don’t do anything,’ explains Yale University PhD student Benjamin Hess. ‘So people have been searching for sources of phosphorus that can react to make the molecules needed for life, and one of the most reactive minerals that they found is a mineral called schreibersite.’

Schreibersite is an iron nickel phosphide that rarely forms on Earth, but is common on many meteorites. Because of this, many researchers believe that schreibersite was deposited on the early Earth by meteorite bombardment and are the likely source of the phosphorus needed for the emergence of life. But Hess and his colleagues Sandra Piazolo and Jason Harvey from the University of Leeds now argue that lightning strikes might have played just as important a role by reducing naturally occurring phosphates into reactive phosphides.

During Hess’ undergraduate research project at Wheaton College, Illinois, he travelled to Leeds to analyse samples from a fulgurite – a glassy material created by lightning striking clay-rich soil. Using scanning electron microscopes and diffraction techniques, Hess and colleagues were able to map the elements and minerals within the samples. ‘In the process of doing that, we found an iron phosphide, which was a surprise,’ says Hess. 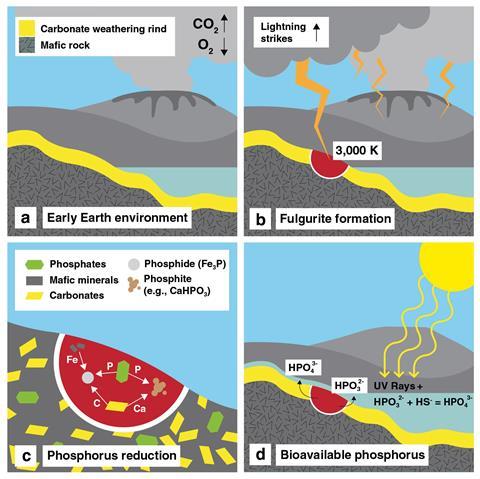 Material struck by lightning can reach temperatures of over 3000K, providing the extreme conditions needed to reduce phosphates, and schreibersite has previously been found in fulgurites. Inspired by the discovery, Hess used a climate model to calculate how much lightning would have struck the Earth over several billion years. From this he was able to estimate how much reduced phosphorus might be produced by lightning. He calculates that up to 1000kg of phosphide and 10,000kg of phosphite could be produced by lightning each year – which Hess estimates is more than would have been delivered by meteorites over the last 3.5 billion years.

‘This lightning strike analysis really shows that the lightning is extremely energetic and given the right mix of materials, you can get a very out of equilibrium environment as a result,’ says University of South Florida geochemist Matt Pasek, who has also discovered reduced phosphorus materials in fulgurite samples. ‘That can drive the production of phosphorus into a reduced form that might be more available for biology.’

However, Pasek also notes that while lightning will have provided a consistent background supply of bioavailable phosphorus, one advantage of meteorites is that they deposit the material in much more concentrated areas. ‘The best example I can think of was a meteorite that hit Russia in 1947 that scattered 20,000kg of material that was chock full of schreibersite over less than a square kilometre,’ he says. ‘Comparatively, there’s fulgurites, probably one in every couple of hundred square kilometres – so you have a whole lot more concentrating power with the meteorites.’

Hess hopes that other researchers will now be inspired to collect other fulgurites from similar rock types to his sample, and find out how much phosphorus is stored in them and in what forms. He also points out that these findings could have significance beyond planet Earth. ‘Meteorites decrease through time after planets have formed, but lightning can be relatively constant in an atmosphere,’ he says. ‘So if we have other planets – other than Earth – where meteorites have become very rare, then lightning is still a viable mechanism for providing that phosphorus.’