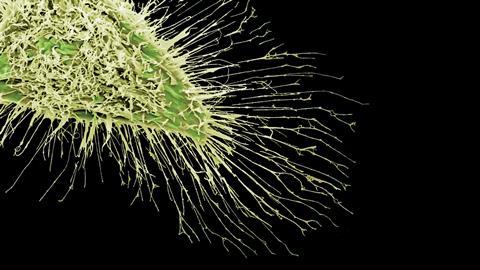 A DNA robot that can walk across biological cell membranes is the first one that can control living cells’ behaviour. The researchers who made the robot hope that it could improve cell-based precision medicine.

A team led by Hong-Hui Wang and Zhou Nie from Hunan University, China, has created a synthetic molecular robot that walks along the outer membrane of biological cells. The robot, powered by an enzyme’s catalytic activity, traverses across receptors that act as stepping stones on the cell surface. With each step, the robot activates a signal pathway that regulates cell migration. Driven by the robot’s movement, the cells can reach speeds of 24 μm/hour.

The researchers write that the DNA robot offers, for the first time, an opportunity to accurately and predictably control the nanoscale operations that power a live cell. They suggest that similar molecular machines that guide cell behaviours could play a role in cell-based therapies and regenerative medicine.