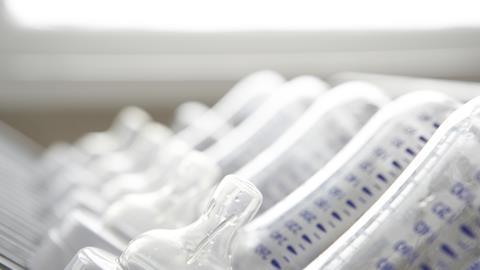 Millions of microplastic particles released by some baby feeding bottles

Plastic infant feeding bottles can release up to 16 million pieces of microplastic during each use. Such bottles are routinely exposed to hot water and vigorous shaking when parents are making formula for babies, which sloughs off particles from the polypropylene. ‘I’m not surprised that we found microplastics released from infant feeding bottles,’ says environmental engineer Liwen Xiao at Trinity College Dublin, ‘but I am shocked at the levels of microplastic released.’

The researchers at Trinity estimated the daily exposure of an infant up to 12-months-old ranged from 14,600 to 4.5 million microparticles.1 Xiao notes that microplastics are found elsewhere, such as bottled water, but the levels reported have been in the thousands per litre. He is concerned that babies could be ingesting doses thousands of times higher than adults.

The team assessed 10 different baby feeding bottles made from polypropylene. These are typically exposed to temperatures of up to 100°C in a cleaning procedure advised by the World Health Organization. For one product, the number of microparticles increased from around one to 55 million particles per litre, when the temperature was increased from 25°C to 95°C. Three products tested for 21 days revealed periodic fluctuations in microparticle release. Heating the milk in the microwave also ramped up the release of microplastics from the baby bottles, ‘due to the generation of localised micro-pockets of superheated water’.

The health consequences for infants ingesting microparticles are unknown. ‘There’s no data available to say that they would have a negative impact or not on an infant,’ says Xiao. There are some studies showing that high levels of polystyrene microplastic ingestion can harm the health of lab mice.

Biologist Martin Wagner at the Norwegian University of Science and Technology says that current understanding of microplastic dietary exposure in children suggests much lower intakes than indicated by this study. ‘This is significant,’ he says. ‘It is related to the small size of particles that they looked at. It sheds new light on microplastics and the key message is that if we look for very small microplastics then we will find a lot.’

‘Although it is too early to make a policy based on this single study, the results ring a red alarm, which calls for re-evaluation of the safety of plastic feeding bottles and assessment of health effects,’ according to Genbo Xu, an ecotoxicologist at the University of Southern Denmark, Odense.

The researchers followed standard procedure for making baby formula, shaking hot water in the polypropylene bottle for 60 seconds. They then passed the water though gold-coated filter paper with a pore size of 800nm. They counted particles using optical microscopy and identified their composition using Raman spectroscopy.

The study will be ‘pretty concerning’ for parents who use these bottles, says Wagner. But he adds that, frustratingly, ‘scientists are pretty much in the dark about what this means toxicologically, [because] there are so few studies on the health impacts of microplastics’.

The study scientists, however, include advice for parents. Formula should be prepared with hot water that is at 70°C or higher in a non-plastic container. When it has cooled it should be transferred to the feeding bottles.

The research paper also suggests that in future ‘surface coatings, functionalisations and plasma treatments may be helpful in reducing or preventing [microplastic] generation’.