Nanosilver fears come out in the wash 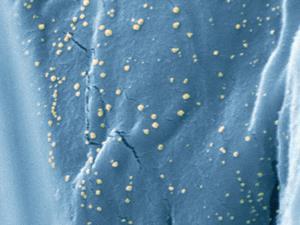 Cotton treated with nanosilver (yellow) under an electron microscope. Are worries about nanosilver unfounded?

Fabrics containing engineered nanosilver – used to kill odour causing bacteria in socks and sports clothing – leak fewer silver nanoparticles into the environment when washed than textiles with conventional silver coatings. The Swiss researchers say that their findings indicate that regulatory assessments of nanosilver have been overly stringent and should be brought in line with traditional silver coatings.

As nanosilver – the most widely used engineered nanoparticle – is incorporated into increasing numbers of products for its antimicrobial properties, the potential risks have become a hot topic, particularly with regard to silver nanoparticles entering the environment. Although the danger to human health is considered to be relatively low, studies have shown that silver nanoparticles can be toxic to many aquatic organisms and bioaccumulate in the food chain.

‘There is a lot discussion on nano and textiles but, surprisingly, very little actual data,’ says Nowack. ‘Our work suggests that regulations should not single out nano-textiles as “bad” but rather focus on all antimicrobial textiles.’

As Nowack showed that silver nanoparticles can form naturally, he suggests that nanosilver was always unknowingly included in risk assessments of traditional silver treatments. ‘So there is likely no additional risk of nanosilver,’ he says.

‘This of course changes the position of traditional silver additives producers - they can no longer point their finger at the nanosilver producers. They are in the same boat,’ says Nowack. ‘The work can form the basis for a more realistic and fact-based assessment of nanosilver, going beyond the “nano is bad“ attitude.’

‘This is an important, novel study that offers useful contributions to the debate over the risks posed by the release of silver nanoparticles into the environment,’ says Teresa Fernandes, who investigates the ecotoxicology of nanoparticles at Heriot Watt University, UK. ‘However, this does not close the debate and does not indicate that nanosilver in textiles would need to be considered in exactly the same way as conventional silver in textiles,’ she adds. ‘Confirmatory studies should be undertaken the also consider different types of nanosilver and different washing conditions.’