Portable laboratory can search for molecules associated with life

Researchers at Nasa’s Jet Propulsion Laboratory (JPL) in California have developed a miniaturised on-the-go laboratory that analyses samples for molecules associated with living organisms. The hope is to one day send this ‘chemical laptop’ to another planetary body such as Mars or Europa, where it could help search for evidence of extra-terrestrial life. 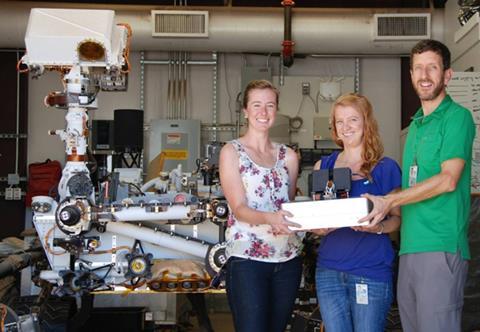 The device is extremely portable – about the size of a regular laptop computer, although thicker to accommodate the chemical analysis components. The team behind its development say it could have several other useful applications, for example environmental monitoring or detecting counterfeit drugs.

In the chemical laptop, capillary electrophoresis is used to separate the different components in a sample. After mixing it with various fluorescent dyes that bind to molecules of interest, the sample is placed into a tiny, etched channel on the surface of a microchip and a voltage is applied. A detector near the end of the microchip uses light to reveal the different dyes.

‘The amount of fluoresce means that there is a lot or a little of the molecule in the sample,’ explains the project’s principal investigator, Peter Willis. By measuring fluorescence as a function of time, the researchers can determine what is in the sample and its quantity. These analyses take about a minute.

Significantly, the chemical laptop may be able to differentiate between amino acids – the building blocks of life – and fatty acids – key components of cell membranes. When the device is set to look for fatty acids, the length of the acids’ carbon chain will be of most interest to researchers because that offers an indication of what organisms are or were present.

The eventual goal is to make this instrument mountable on a space rover and driven automatically on planetary bodies like Mars and Europa. ‘The rover would drill into the ground and collect a sample and then deliver some of that dirt to our instrument,’ Willis explains.

However, at the moment the chemical laptop can only handle liquid samples. ‘What we need to do is to put a front-end onto our instrument so that we can take dirt and extract the molecules from the dirt,’ Willis says.

The instrument can currently detect concentrations as low as parts per trillion, and the team want to improve its sensitivity. They are currently testing a new laser and detector technology, and are planning field test for January 2017 in the Atacama Desert in Chile, which has a similar environment to Mars.

Although any involvement in space exploration is still a long way off, the portable technology may represent a significant asset for analytical chemists, because it can be reprogrammed for general purpose operations to automate processes and make them faster.

‘What would be really valuable is the automation of all the different chemical steps required,’ Willis says. ‘Chemists could take this, programme it to do whatever chemistry operations they wanted, and use the technology for their own purposes.’