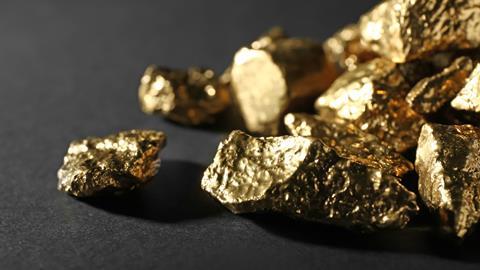 Two new polypseudohalogen compounds derived from cyanogen bromide have the unusual property that they can dissolve gold at room temperature. The discovery could lead to safer chemicals for leaching gold and other noble metals from ore, as well as offer a new way to recover and recycle metal from electronic waste.

Polyhalogen chemistry has been of increasing interest in recent years. However, due to their high instability, volatility and problematic synthesis, less time has been spent studying polypseudohalogens, which are pseudohalogen compounds that essentially imitate halogens in their chemistry while also possessing polyhalogen ions.

Now, Benjamin Schmidt and colleagues in Sebastian Hasenstab-Riedel’s group at the Free University of Berlin have used their expertise in polyhalide chemistry and halogen bonding to explore the pseudohalogen compound cyanogen bromide. They have also managed to synthesise and characterise two new anions of polypseudohalides that can dissolve gold. 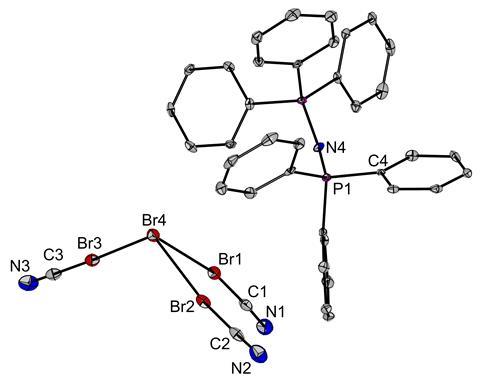 The team made the new compounds in a simple one-pot synthesis by carefully adding the highly toxic cyanogen bromide to a bromide salt in an acetonitrile solvent. The resulting salts were then characterised using x-ray diffraction and spectroscopy techniques to prove the structures of the polypseudohalides. Depending on the cation, the formation of room temperature ionic liquids was possible.

When the team left elemental gold in the ionic liquids overnight they found it was completely dissolved by morning. ‘We knew that cyanogen bromide was used in some of the older processes to dissolve gold from crushed ore,’ says Schmidt. ‘With our new compounds it could be possible to simplify the process of gold leaching by using neat room temperature ionic liquids based on cyanogen bromide.’

Cyanogen bromide is highly volatile and is readily inhaled or absorbed through the skin making it extremely dangerous to handle. The new compounds are ten times less volatile though. However, despite safer handling, the new compounds are most likely harmful to the environment.

‘The transformation of the very toxic and volatile cyanogen bromide into an ionic liquid of low volatility is particularly exciting,’ comments Jason Love, a chemist working on metal recovery at the University of Edinburgh, UK. ‘The selective dissolution of gold using straightforwardly handled reagents is an important aspect of recycling gold from primary ores, and increasingly from secondary resources such as electronic waste.’

‘We now have to take a closer look at the properties of our new compounds. We want to dissolve several metals and investigate the precipitation of them,’ explains Schmidt. ‘It would also be interesting to know if the reactive ionic liquid can be fully recycled and used again for metal recovery.’