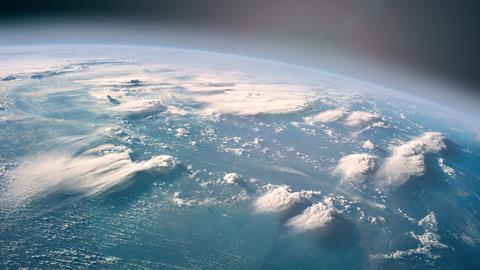 While the Montreal protocol has successfully limited the production of long-lived, ozone-depleting substances, it never covered short-lived ones like chloroform

The protocol never covered very short-lived substances, such as chloroform, which was thought to originate mainly from natural sources and then degrade in the lower atmosphere within six months. There, hydroxy radicals break chloroform down in to inorganic chlorine, which is washed out as hydrogen chloride, a soluble gas. However, weather events are now known to lift chloroform high into the upper atmosphere. Once in the lower stratosphere, the chlorine persists for longer and helps to catalyse the destruction of ozone.

‘If you emit chloroform somewhere like Europe, most of it is destroyed in the atmosphere before it gets higher into the stratosphere,’ explains Matt Rigby, a researcher at the University of Bristol, UK, who was involved in the new analysis. ‘However, the meteorology of some parts of the world allow it to be lofted up to the upper atmosphere quite quickly.’ This happens during monsoon conditions in eastern and southern Asia.

Increasing chloroform emissions from China ‘pose a growing threat to ozone-layer recovery,’ the new analysis concludes. Further, the increase in chloroform since 2010 could delay the Antarctic ozone recovery by approximately 0.4 years, providing there is no further rise beyond 2015. If growth continued, the delay could be four to eight years.

The research did not identify the exact emission sources. However, Chinese demand for chloroform is expected to increase. ‘Chloroform is used as a feedstock to produce other chemicals and for hydrofluorocarbons and fluoropolymers,’ says Rigby. ‘It is possible that industries are simply using more chloroform than they have in the past.’ Chloroform may escape during transport or leakages during industrial processes.

Five Advanced Global Atmospheric Gases Experiment (AGAGE) stations in Trinidad, Samoa, Ireland, Barbados and Tasmania initially recorded a rise in chloroform levels during 2010–2015 of between 2.6 and 6.3% a year. Pinpointing eastern China as the main source came after modelling observational data from recording stations in South Korea and Japan. 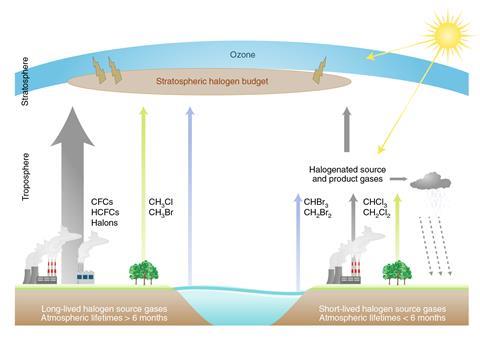 Atmospheric chemist Björn-Martin Sinnhuber at the University of Bremen, Germany, notes the recent detection of emissions of very short-lived chlorine compounds could provoke a reappraisal of their significance: ‘The impact is still small, but if this is a trend and emissions continue to increase, in future it may become important.’ A previous study had found that rapid increases in dichloromethane emissions could delay the recovery of the ozone layer. Dichloromethane is an industrial solvent and another very short-lived substance, again not regulated by the Montreal Protocol.

‘A discussion to regulate these very short-lived substances would be useful, but it would take time to include them in the protocol,’ says Lambert Kuijpers from Eindhoven University of Technology in the Netherlands, who is a member of the Montreal protocol’s technology and economic assessment panel. Since emissions appeared concentrated in one region, ‘there must be other quicker ways to deal with limiting their growth,’ he adds.

‘One scientific issue is that these short-lived substances tend to be quite variable in the atmosphere and their concentrations haven’t been measured in many places. It is difficult to be confident right now about what is changing and whether that represents long-term change or natural variability,’ adds John Pyle, an atmospheric scientist at the University of Cambridge and co-chair of a panel that gives advice to parties to the protocol. ‘But there is no doubt that parties to the protocol have become more interested in these short-lived compounds over the last two to three years.’