Researchers re-evaluating a previously purported aminoboration reaction have rectified the mechanism and revealed a new type of metal-free hydroamination reaction, catalysed by BCl3.1 The findings will benefit chemists searching for atom economic ways to synthesise important pharmaceuticals and agrichemicals.

In 2015, Yu-Ming Li and their group at Nankai University, China, reported an intramolecular aminoboration reaction on unfunctionalised olefins.2 Based on experimental results and using density functional theory calculations, they predicted a mechanism where HCl elimination was the rate-determining step with an energy barrier of 37.6kcal/mol. 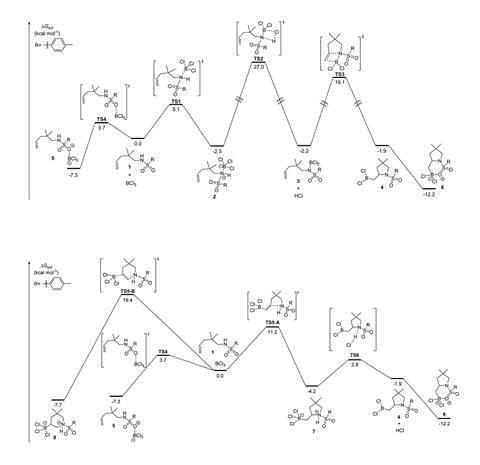 37.6kcal/mol, however, is too large a barrier to overcome in the mild conditions Li used, according to Yong Liang of Nanjing University and Fang Liu of Nanjing Agricultural University. Inspired by this discrepancy, Liang and Liu decided to re-visit the mechanism for BCl3 induced aminoborylation on alkenes and alkynes. Using density functional theory calculations, they identified that an interaction between the C=C double bond and BCl3 activates the reaction with alkenes – a more favourable pathway than Li had reported. And on performing the aminoborylation reaction experimentally on unfunctionalised alkynes, they discovered it favoured a hydroamination product.

Upon further computational investigation into the aminoboration of alkynes, they also encountered a spontaneous and unexpected protodeboronation reaction. They saw that during the aminoborylation reaction, the chloride ion in HCl coordinates to the boron in the intermediate molecule, promoting the dissociation of BCl3 to leave the hydroamination product. This new reaction, the researchers say, is one of the first metal-free hydroaminations on an unfunctionalised alkyne.

‘Hydroamination reactions are useful for the construction of heterocycles containing nitrogen atoms, which widely exist in drugs and bioactive molecules,’ explains Liang. ‘A metal-free method can avoid heavy metal residue in synthesis, which will be really significant to organic chemists in the field.’

‘This is a rare example of mechanistic insights being immediately used to predict and develop new reactions,’ comments Peng Liu, a computational organic chemist at the University of Pittsburgh, US. ‘The unique roles of BCl3 revealed in this study are expected to benefit future development of transition-metal-free borylative cyclisations and hydroaminations.’

Liang and Liu went on to test the method on a range of substrates, showing the wide applicability of the reaction. The pair now intend to explore other BCl3-mediated reactions.