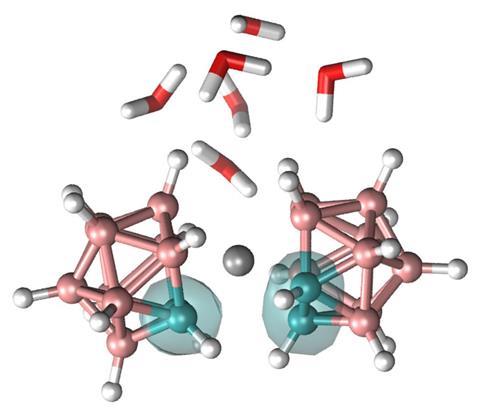 Atomistic simulation of the organoboron amphiphile Cosan. How it can behave like a surfactant without the classic hydrophilic head and hydrophobic tail has remained a mystery, but now an answer may be forthcoming

Why does a molecule that has no obvious hydrophobic and hydrophilic parts behave like a surfactant? A team of chemists in Spain has discovered an unexpected isomer that might be the final clue to solving the mystery of these ‘stealth’ amphiphiles. However, other scientists think that this work isn’t the end of the story and doesn’t explain everything.

Chemists often draw surfactant molecules as a dot, representing the molecule’s water-loving or hydrophilic head, and wavy lines for its water-hating, hydrophobic tail. But there is a class of inorganic compounds that turns this image on its head. Some boron anions – such as dodecaborate [B12H12]2– – like to sit at oil–water interfaces and even form micelles. This typical amphiphilic behaviour is usually seen in organic surfactants.

However, these clusters look completely different to classic surfactants. They have neither head nor tail. In fact, they have no discernible hydrophilic or hydrophobic features at all, which is why they were dubbed stealth amphiphiles. The reason for their behaviour had remained somewhat of a mystery. Some scientists suspected a non-classical hydrophobic effect. Known as a chaotropic effect, it is driven by enthalpy changes, unlike the entropy-driven hydrophobic effect.

Now, chemists led by Francesc Teixidor and Jordi Faraudo at the Institute of Materials Science of Barcelona have found a solution to the stealth surfactant puzzle, at least when it comes to cobaltabisdicarbollide (Cosan, [Co(C2B9H11)2]–). Their simulations showed that the phenomenon is simply classic amphiphilic behaviour of one of the molecule’s isomers. In water, Cosan takes on a shape that gives it a distinct hydrophilic head – the boron atoms – and hydrophobic tail – the carbon atoms.

Cosan has three rotameric forms, cisoid, transoid and gauche, conformational isomers arising from hindered bond rotation. ‘Because of the activation energy, [the rotamers] are in reality very close to geometrical isomers like cis and trans alkenes,’ Teixidor explains. 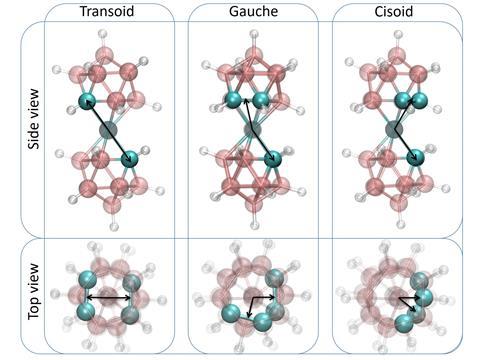 In vacuum, transoid Cosan is most stable. But the team discovered that in water the cisoid rotamer dominates. In this isomer, all of the carbon atoms sit on one side of the molecule, forming the hydrophobic tail group. Negative charge density is centred on the boron atoms, making this part hydrophilic.

‘Our main point is that you don’t need any new classifications – like non-classical hydrophobic effect – to find new concepts,’ says Faraudo. ‘Rather you need to analyse your molecule in detail to observe that in water it has a structure that is not the one that we expected; it is a different rotamer.’

A bit more complicated than that…

Other researchers, however, aren’t entirely convinced. ‘I like their results, but I don’t agree with the claim that the compound in the cisoid form is amphiphilic in the classical sense because I think it’s more complicated than that,’ says Pavel Matějíček from Charles University in Prague, Czech Republic, one of the researchers who coined the term ‘stealth amphiphiles’.

‘I would say that for this particular Cosan their explanation can contribute to understanding the amphiphilic and self-aggregation effect – though it might be just this one special case,’ says Werner Nau, who works on supramolecular chemistry and chaotropic compounds at Jacobs University Bremen in Germany. Nau hopes that the Spanish team will test their method for different Cosan derivatives and borate clusters, some of which are completely symmetric and can’t adopt different conformations.

What the researchers do agree on is that Cosan and cousins have promising applications in medicine. ‘The amphiphilic character influences cellular uptake and means they are concentrated in cancer cells’ nuclei, where they can be used for boron neutron capture therapy,’ explains the study’s co-author, Clara Viñas.

‘What we are doing now is to study biological interactions – crossing of membranes, interactions with proteins and DNA,’ says Faraudo.