New kind of heterocycle made in just one easy step 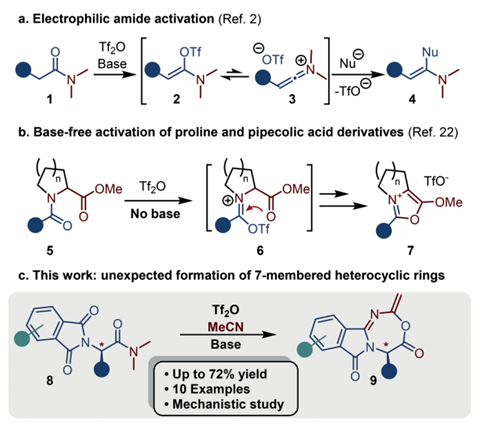 Chemists in Austria have discovered a never-before-seen class of heterocycle and made it in a single reaction.

The team around Nuno Maulide from the University of Vienna was surprised to find an unusual product after combining α‐phthalimido‐amides with triflic anhydride – a strong electrophile – and a base in acetonitrile as the solvent. Although the reaction has similar ingredients to the electrophilic amide activation, it produces an entirely different product, incorporating the solvent to create a new type of heterocycle. The fused, seven-membered rings contain one oxygen and two nitrogen atoms.

While the compounds turned out to be unstable during purification – final yields were lower than the ones measured before column chromatography – 10 examples made with different α‐phthalimido‐amide derivatives were isolated.

After some mechanistic investigations – isotope labelling and experiments using enantioenriched substrates – the team concluded the ring formation doesn’t go through the keteniminium intermediate that is the hallmark of electrophilic amide activation reactions. Instead, the chemists proposed the substrate first forms a five-membered ring, which is attacked by acetonitrile. The molecule then undergoes a ring enlargement to the final product.