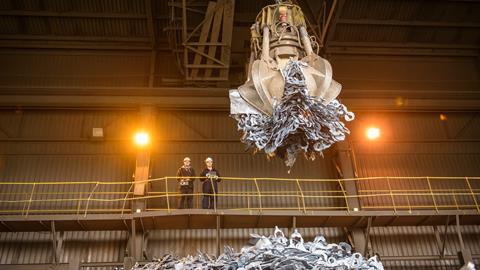 A new process for electrochemically removing carbon from steel during recycling to create ultra-pure low carbon steel has been developed in Canada. The researchers believe that the technology required could potentially be integrated into secondary steel mills, allowing the recycling of high-carbon steel into purer, higher-grade metal more in demand for hi-tech industries.

With climate change and waste disposal of increasing concern and the steel industry, which requires coal as a reductant to remove oxygen from iron ore, responsible for around 7% of all anthropogenic carbon emissions, recycling of used steel becomes ever-more important. Many hi-tech engineering sectors such as the electronics and automotive industries are more dependent than ever on ultra-low carbon steels, sometimes with carbon contents below 0.003%, for thin car body panels or precision alloying. Much of the scrap steel being recycled is relatively high-carbon ‘hard’ steel, however. Carbon is removed from molten iron industrially by blowing oxygen through it. However, the process to reduce the carbon and produce ultra-low carbon steel often requires multiple stages and several reagents, and results in the loss of some of the metal.

During conventional recycling, scrap steel is melted in an electric arc furnace with a mixture of reagents called a slag to remove the impurities. Recycling facilities are therefore already well-suited to use electricity. With this in mind, the researchers developed a secondary process in which the molten slag was used as an electrolyte. ‘We had to apply an electrochemical potential across the ceramic electrolyte between the molten iron and another electrode,’ explains chemical engineer Gisele Azimi of the University of Toronto in Canada, who led the research. 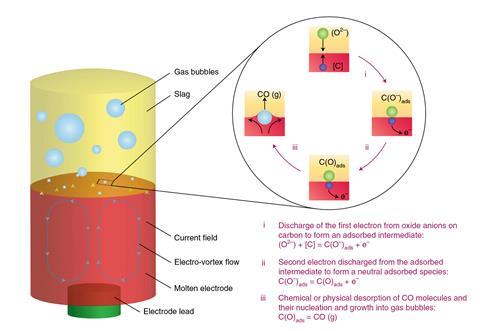 Carbon in the molten iron anode was oxidised by oxygen from silicon dioxide in the slag, producing carbon monoxide which bubbled out. Silicon ions, meanwhile, were reduced to metallurgical-grade silicon at the molybdenum cathode. This could potentially be used for alloying the recycled steel. The researchers found that their process reduced the carbon content of molten iron from 3.78% to 0.84%, and could refine iron with 0.005% carbon content down to 0.001%. They are now working to scale up the process and investigating the removal of other impurities using the same principle.

Materials scientist Katrin Daehn at the Massachusetts Institute of Technology in the US is intrigued. ‘I think it’s a good step forward for trying to advance existing recycling technologies,’ she says. ‘What I think would be really cool is if electrorefining could be made to work for contaminants such as copper or tin or phosphorus that are sometimes present in secondary steel for which there’s currently no good process to get them out.’