Scientists have put forward a new hypothesis for the molecular mode of action of lithium drugs in bipolar disorder: by competing with sodium for binding sites on proteins that affect various cell-signaling cascades.

Lithium has been the number one treatment for bipolar disorder for years. William Hammond, at the Bellevue Hospital Medical College in New York, US, first prescribed lithium bromide for mania in 1871. However, scientists still don’t know exactly how it works.

What we do know is that lithium’s therapeutic effects arise from it normalising cells’ sodium and calcium ion levels, interacting with neurotransmitters and altering cell signaling. One common hypothesis to explain how it does this is by competing with magnesium ions for binding sites on specific proteins in the body. For example, lithium ions can bind to the enzyme glycogen synthase kinase 3β (GSK3β), which regulates a number of cell functions including neurotransmission. ‘It’s not that people don’t know what lithium does, it does too much,’ comments Evan Snyder a neuroscience expert at the Sanford-Burnham Medical Research Institute in the US, who was not involved in the research. 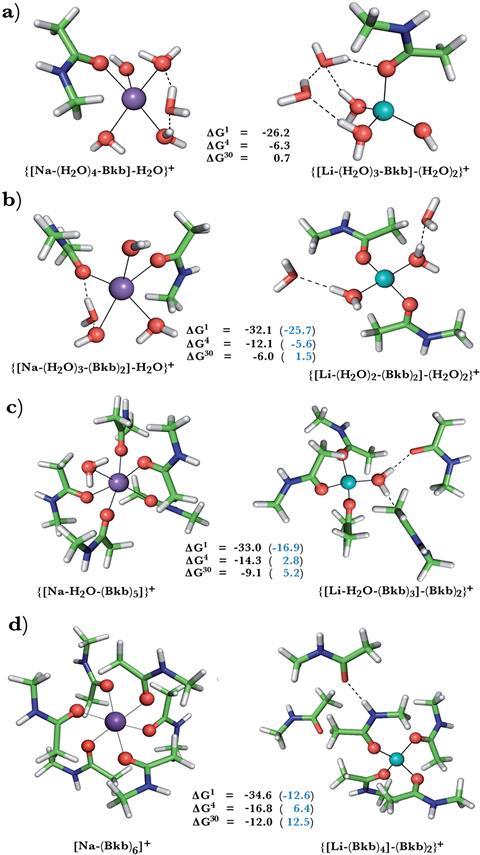 Now, research by Carmay Lim of Academia Sinica in Taiwan, and her collaborators, reveals that lithium ions can compete with sodium ions for sodium-binding sites in signal transducing proteins, such as neurotransmitter transporters and G-protein coupled receptors. ‘This is of great interest as it suggests a novel mode of therapeutic action,’ comments Lim.

Lim’s team modeled sodium binding sites of G-protein coupled receptors and neurotransmitter receptors and calculated the free energy of sodium displacement by lithium. They investigated how flexibility and accessibility to the solvent, as well as the composition and net charge of the binding site, affected the outcome. Rigid sites, modeled by freezing the protein ligands in position, favoured sodium binding. This is because lithium ions, in comparison to sodium ones, prefer a tetrahedral coordination geometry and shorter bond lengths. Allowing the ligands to rearrange to accommodate these preferences favours lithium, shown by a negative ΔG value for sodium displacement by lithium. Lithium also has a higher dehydration penalty than sodium. This means that when the sodium leaves the binding site, the favourable energy release is smaller than the unfavourable energy change when lithium enters. The sodium to lithium ion switch is therefore unfavourable if solvent molecules can access the site. Buried sites, however, favour the sodium to lithium swap due to stronger ligand interactions with lithium.

‘Our findings will promote further research of side effects caused by lithium and also understanding other possible targets of lithium therapies,’ believes Lim. Lithium drug’s side effects, including vomiting, weight gain and impaired memory, are indeed a problem and can discourage patients from using thwm even when needed. Snyder agrees and adds ‘once we know exactly what it is that lithium is doing, we can design drugs that are much more specific, and ideally more effective, with fewer side effects.’