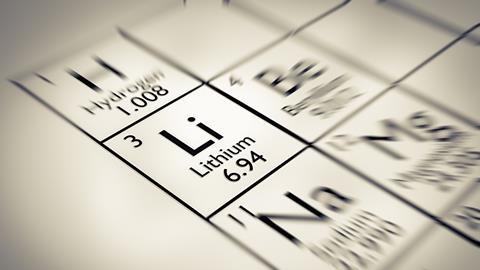 By putting lithium at the core of a clever cycling strategy, researchers from the US have demonstrated a way to use renewable energy to drive ammonia production at atmospheric pressure.

A hundred years on from its development, the Haber–Bosch process remains the primary industrial route to make ammonia. Ammonia’s importance as a fertiliser is without question, but so is the Haber–Bosch process’ impact on the environment. Haber–Bosch breaks the triple bond in molecular nitrogen with high pressures and temperatures, and the hydrogen gas it requires to turn nitrogen into ammonia mainly comes from burning natural gas. As a consequence, industrial ammonia synthesis is reportedly responsible for up to 3% of global CO2 emissions. It is no wonder that significant effort is going into seeking alternative, more sustainable approaches.

Electrochemistry has long been mooted as a possible solution, but the current efficiency of such processes is typically below 1%. Now, scientists from Stanford University have proposed an electrochemical lithium cycling process to make ammonia, achieving an efficiency of 88.5% in lab-scale tests. 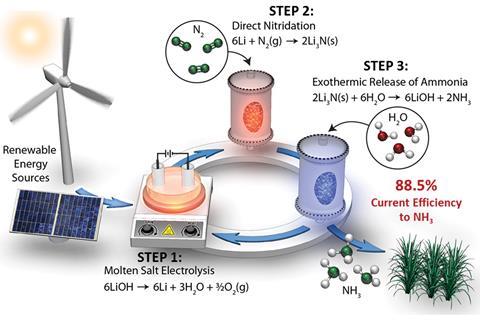 Unlike traditional thermal catalysis or thermochemical looping strategies, this process works at ambient pressure, moderate temperature and does not require H2.

The process uses electricity – which can have a renewable source, such as wind or solar energy – to electrolyse lithium hydroxide and produce lithium metal. Exposing this lithium to a flowing nitrogen atmosphere gives lithium nitride and to complete the cycle, this lithium nitride is combined with water in a hydrolysis reaction. Using water as the hydrogen source, rather than hydrogen gas itself, is another beneficial aspect of the process. This generates the desired product of ammonia, and regenerates the lithium hydroxide used up in the initial stage.

Jens Nørskov, who co-lead this research, says that lithium’s reactivity is crucial to the project’s success. ‘The fact that lithium binds nitrogen so strongly simply means that you pull down the barrier for nitrogen dissociation enough that you can do it at room temperature. So if you can make lithium, then you can also make lithium nitride.’

Given that lithium is extremely reactive, this is not as simple as it sounds. ‘The trick in the process is to not do this in an environment where there is hydrogen present. If you do, you end up making hydride or amines that are much more stable – that is a thermodynamic sink that you will never get out of.’

Splitting and protonating nitrogen in completely separate steps has enabled this huge jump in efficiency. As catalysis expert Jingguang Chen of Columbia University, who was not involved in the research, explains, ‘This approach prevents the undesired hydrogen evolution reaction and thus leads to a much higher efficiency.’

The team acknowledge that scaling up this demonstration into something industrially feasible will be challenging, but the prospect of powering ammonia production using renewable energy is admittedly very exciting. Josh McEnaney, part of Nørskov’s team, says: ‘Renewable energy sources continue to be projected as coming down in price around the world, so if you can electrify processes such as this, you have a shot at making processes more sustainable and not needing fossil fuels to power them, which we think is really important.’