An ink that can be chemically switched to reveal or hide messages has been developed by researchers in China who say it could find uses in anti-counterfeiting or offer more secure encryption of confidential documents.

Invisible inks have been developed in recent years from a variety of smart materials, including metal-organic frameworks (MOFs) that contain lanthanide elements. However, these are not secure enough for information encryption applications since they are designed to glow readily when exposed to light such as UV.

Now, Liang Li and colleagues at Shanghai Jiao Tong University have used a non-luminescent MOF to create an ink that only becomes visible when a chemical reaction triggered by a halide salt transforms it into luminescent perovskite nanocrystals, materials more often associated with next generation solar cells. 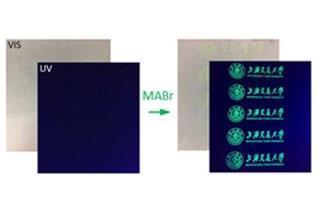 Seeing its potential to encrypt and decrypt information, the team made an ink by dissolving a lead-MOF precursor in a solvent containing dimethylsulfoxide, ethanol and ethylene glycol. This mixture could be loaded into an inkjet printer.

Text and patterns, including a butterfly and QI codes, were printed onto paper with the MOF ink. When sprayed with a n-butanol solution containing the halide salt methylammonium bromide, the images became visible within a few minutes. To make them vanish, the paper was immersed in a methanol solution for ten minutes, which destroyed the visible perovskite nanocrystals. By applying more spray the images were revealed again. The decryption/encryption cycle could be repeated up to 20 times with no apparent deterioration of the images.

Bipin Gupta, who investigates luminescent materials and security inks at India’s National Physical Laboratory, has concerns about the technique. He suggests that the instability of perovskite nanocrystals in the atmosphere presents a limitation, and points out that the scaled-up synthesis required for commercialisation is a long way off. ‘There is no report to date of mass scale production of MOFs,’ he says.

But Li thinks for this particularly application, the preparation of the MOF precursors for the ink should be relatively ‘easy and cheap’. He also says that the perovskites’ instability need not be an issue because the information is stored by the MOF ink, which is highly stable. Perovskite nanocrystals are only formed for a short period when the information needs to be read before being converted back to the MOF, he explains.

However, Li admits that ‘the toxicity of lead-based materials may be [a big] obstacle’ and hopes that future research will reveal lead-free alternatives. There is also currently a serious flaw in the security of the technique, as anyone in possession of the necessary halide salt can gain access to the encrypted information. It’s another problem Li hopes further work can solve.